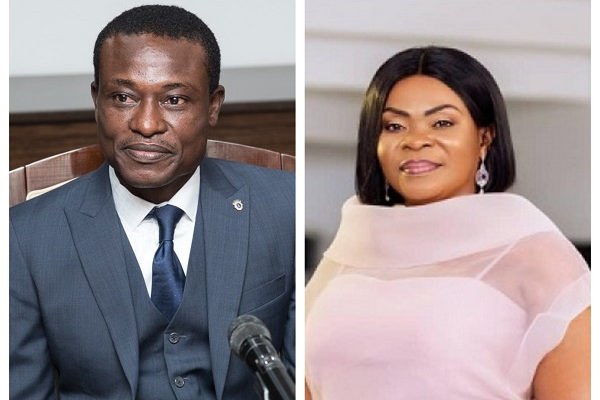 In the past few days, the subject of tax evasion by Labianca Company Limone ited Founder and Chief Executive Officer (CEO), Eunice Jacqueline Buah Asomah-Himmeh has emerged in the headlines.

This follows an investigative report from the Office of the Special Prosecutor dated August 3, 2022, and titled: “Report of Investigation into Alleged Commission of Corruption and Corruption Related Offences Involving Labianca Group of Companies and the Customs Division of the Ghana Revenue Authority.

In the said report, Eunice Asomah-Hinneh is accused of using her position as a board member on the Ghana Ports and Habours Authority (GPHA) and a member of the Council of State to influence a favourable decision from the Customs Division of the Ghana Revenue Authority under the supervision of a Deputy Commissioner of Customs in charge of Operations; Joseph Adu Kyei.

The report further noted that the decision resulted in a short collection of or shortfall in revenue of some 1,074,627.15 from a total of 531 declarations in respect of Labianca.

The OSP report also noted the conclusion was drawn on the matter after interviewing all individuals regarded as important for the investigations including the implicated Labianca CEO, Eunice Jacqueline Buah Asomah-Himmeh, Deputy Commissioner of Customs in charge of Operations; Joseph Adu Kyei, Managing Director of Labianca, Etse Gadegbeku and Commissioner for Customs, Colonel (Rtd.) Damoah.

Labianca Company Limited commenced operations in 2014 and it is wholly owned and controlled by Ms. Asomah-Hinneh on all practical and legal considerations. The company, it appears, imports about two hundred (200) forty (40) footer shipping containers of frozen chicken parts, fish, pork and fries monthly primarily from Europe and the United States of America. It enjoys a substantial market share in the imported frozen foods industry.

There was not much engagement with the Customs Division in the first three (3) years of the company’s operations beyond the settlement of standard customs duty and other tax obligations until 2017 when the company actively commenced applications to the Customs Division for the acceptance by the latter of the values of frozen foods it intended to import.

By the time the company commenced the applications, Ms. Asomah-Hinneh had been elected a member of the Council of State representing the Western Region and appointed a member of the governing board of Ghana Ports and Harbours Authority – positions she held at all material times. On this reckoning, Ms. Asomah-Hinneh is a politically exposed person as defined under section 79 of Act 959.

A joint application was submitted for the acceptance of values of frozen foods intended to be imported lodged at the Customs Division by Labianca and Rafano Frozen Foods Company Limited on 6 April 2021, two (2) months after the appointment of Mr. Adu Kyei as the Deputy Commissioner of the Customs Division in charge of operations.

The application requested for the acceptance by the Customs Division of a range of values between 50% - 80% lower than the approved benchmark values of the frozen foods in question which was initially declined by Adu Kyei.

Mr. Adu Kyei however later proceeded to render a customs advance ruling to the applicants by reducing the values of their intended imports between a range of 5% - 10% below the approved benchmark values of frozen foods. Mr. Adu Kyei claimed that he based his decision on proper procedure – being a letter dated 6 February 2018 authored by Mr. Isaac Crentsil, a former Commissioner of the Customs Division and that his decision resulted in the prevention of loss of revenue to the State.

Mr. Adu Kyei also contended that his decision to reduce the benchmark values for the applicants was founded on the practical guidelines for valuation control by the World Customs Organization issued in June 2012, particularly at pages 22 and 23.

Colonel (Rtd.) Damoah on his part acknowledged the disingenuity of the outcome by admitting that the applicants did not meet the legal requirements for the issuance of customs advance ruling. Then again, Ms. Asomah-Hinneh and Mr. Etse Gadegbeku stated expressly that Labianca did not apply for customs advance ruling.

The OSP found that Mr. Adu Kyei’s cited bases for his decision are untenable, and the decision finds its anchor (if there is such) on no other hypothesis but one – that it was borne of influence peddling or trading in influence.

Mr. Adu Kyei’s decision to render an advance ruling to the applicants by reducing the values of their intended imports between a range of 5% - 10% below the benchmark values was wrongful and unsupported by the requirements of the law for the issuance of customs advance ruling. Mr. Adu Kyei willfully put aside the law by embarking on his own predilections.

OSP’s jurisdiction noted that there was a prescribed a specialised procedure by which an activity is to be performed, it is that procedure alone that is to be followed, and officials cannot call into assistance their own proclivities to fashion an outcome. Consequently, as far as customs advance rulings go, it was as if the applicants had presented a blank sheet of paper before the Customs Division and Mr. Adu Kyei had no warrant to proceed.

The OSP also found that, Mr. Adu Kyei’s based his decision on a letter dated 6 February 2018 authored by the Commissioner of the Customs Division at the time and the practical guidelines for valuation control by the World Customs Organization issued in June 2012, particularly at pages 22 and 23.

The letter defeats Mr. Adu Kyei’s contention and it is contrary to his decision, by reason of the fact that the application contained no discernible and verifiable information to make it good for the purposes of the letter.

Mr. Adu Kyei pulled the “information” from out of nothing. Mr. Adu Kyei’s insistence on the rightfulness of his actions and his proclamation that he saved funds for the Republic is akin to a self-righteous declaration that he is an overly philanthropic and benevolent public official who perceives non-existent and scientifically unverifiable information on applications to render them fit for purpose.

A 2019 directive by government for benchmark values to be reduced significantly – thirty percent (30%) for vehicles and fifty percent (50%) for all other goods marked a clear departure from the 6 February 2018 letter that read – [Please be informed that with effect from Tuesday, 13 February 2018 the following graduated valuation shall apply to frozen foods imported into the country relating to the quantum of the consignment per shipment and the value per kilogram vis-à-vis the benchmark value].

The World Customs Organization Practical Guidelines for Valuation Control, June 2012 do not in any way or form back Mr. Adu Kyei’s decision.

Mr. Adu Kyei’s decision to issue customs advance ruling to the applicants, resulted in a short collection of or shortfall in revenue in the amount of One Million Seventy-Four Thousand cedis Six Hundred and Twenty-Seven cedis Fifteeen pesewas (GHC1,074,627.15) from a total of five hundred and thirty-one (531) declarations in respect of Labianca. Therefore, it lies ill in Mr. Adu Kyei’s mouth to claim that he saved the Republic financial loss by his conduct; and his claimed bases for his decision are unsupportable afterthought.

According to the OSP, there is strong evidence to suggest that Mr. Adu Kyei’s decision to issue a customs advance ruling for the applicants was procured through influence peddling or trading of influence by Ms. Asomah-Hinneh by employing her position as a member of the Council of State and a member of the Board of Directors of Ghana Ports and Harbours Authority. 4.34

The report also concluded that the conduct of Mr. Adu Kyei and the placid coddling by Colonel (Rtd.) Damoah portends an institutionalised culture of lighthearted unconcern regarding impropriety of action at the Customs Division of the Ghana Revenue Authority – which indicates a high propensity to engender corruption and corruption-related activities.

Below is the full report: