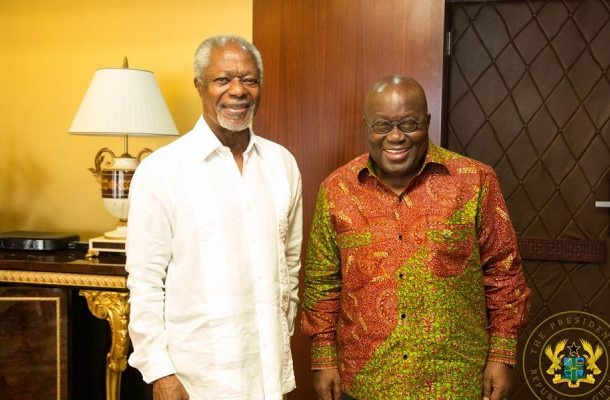 Charming, cosmopolitan, consensus-builder, elegant, eloquent, gentle-mannered, modest, polyglot, proud African, peacemaker, quintessential diplomat, these words are still inadequate to capture the fullness of the personality of Kofi Annan, one of the truly iconic figures of modern times.Even though he was my senior, we were good friends for most of my adult life. His father, H.R Annan, was one of the stalwarts of the Danquah-Dombo-Busia political tradition, serving as the Ashanti Regional Minister under Prime Minister Dr. Kofi Abrefa Busia’s Progress Party Government of the 2nd Republic.

Although he never openly acknowledged, in my presence, his attachment to the tradition, his advocacy of human rights, respect for the rule of law and the principle of democratic accountability was the very essence of that tradition.Highly admired Secretary-General of the United Nations, Kofi Annan was the first from sub-Saharan Africa to occupy this exalted office, which made him the world’s top diplomat. He brought considerable renown to our country by this position and by his conduct and comportment in the global arena. Indeed, the outpouring of tributes from the world over is an accurate measure of the man, a man who gave his life to making peace where there was conflict, to defending the voiceless who were powerless, to promoting virtue where there was evil.Despite the unjustified attacks on him, trying to fix him with responsibility for the genocides in Rwanda and Srebrenica, when he was Head of UN Peace Operations, he never lost his moral compass, as he showed, when he stood up to the might of the United States of America, when she was embarking on her ill-fated intervention in Iraq. Kofi Annan’s epic, but unavailing effort to establish the supremacy of international law over the actions of even the world’s greatest power, won him the admiration of all right-thinking persons. He has been vindicated by history.I recollect with fondness, that eventful day of Friday, 11th August 2006, when, as Foreign Minister, at the time Ghana occupied one of the non-permanent seats on the UN Security Council, I chaired the meeting of the Council which took the decision that halted Israel’s incursions into Lebanon by voting Security Council Resolution 1701. Seated to my immediate right, when that vote was taken, was my compatriot, Secretary-General of the United Nations, Kofi Annan. What a proud day it was for me and for Ghana.Kofi Annan was an ardent believer in the capacity of the Ghanaian and African to chart his or her own course onto the path of progress and prosperity. He found the vision of a Ghana Beyond Aid, indeed of an Africa Beyond Aid, very appealing. Undoubtedly, he excelled in the various undertakings of his life, leaving in his trail most pleasant memories. His was a life well-lived.He gave me sensitive, deeply appreciated advice when I became President of the Republic. The last time I saw him was when he came to my office, at Jubilee House, on Friday, 10th March, to inform me, much to my discomfiture, that he could no longer continue to serve as Chancellor of Ghana’s premier university, the University of Ghana, Legon, since he had served the two-terms permitted by the statutes of the University. I bemoaned my ill-luck, even though, as life would have it, the University has found in Mary Chinery-Hesse, his old and trusted friend, a worthy successor.A devout Christian, an outstanding Ghanaian, who served his country, Africa and humanity with dignity and humility, has left us to join his Maker. Ghana, Africa and the world have suffered greatly from his passing.I am wholly humbled by the opportunity given to me, by the Grace of God and the generosity of the Ghanaian people, to decree, as President of the Republic, most fittingly, a state funeral in his honour.He had strong, loving ties to his maternal and paternal origins, and has left behind his constant companion, his beloved, devoted wife, Nane Maria, and their cherished children, Ama, Kojo and Nina. On behalf of the Government and people of Ghana, my wife, Rebecca, and our children, I extend our profound condolences to his entire family on its irreparable loss, and wish him peaceful rest in the bosom of the Almighty. He deserves it. God bless him.Accra, 1st September, 2018.