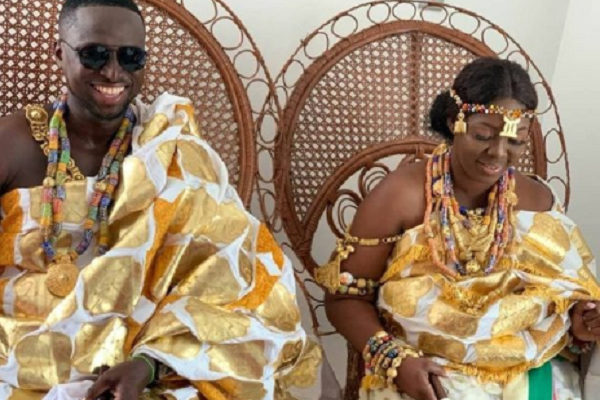 The ex-wife of popular Ghanaian comedian Funny Face has tied the knot at a private ceremony in Accra on July 28, 2021.
In some videos that have gone viral on social media, Elizabeth Ntim, and her newly wedded husband, Eric Adjei was captured glamorously dressed in the traditional ‘Kente’ outfit.

Both were seen exchanging vows at the engagement ceremony while family members, friends, and well-wishers cheered on.

According to reports, Elizabeth Ntim and Eric Adjei have scheduled to hold their white wedding at the Charismatic Anointing Ministry International, Lapaz Race Course on July 31, 2021.

Funny Face on the other hand has posted a picture of his former wife on social media, wishing her all the best in marriage.

It can be recalled that Funny Face and his ex-wife allegedly filed for divorce sometime in 2016 on the grounds of infidelity on the part of the woman.

The two washed their dirty linen in public after their bitter divorce and at some point, Elizabeth claimed Funny Face lasts two minutes in bed.