General Mosquito gets his masters degree 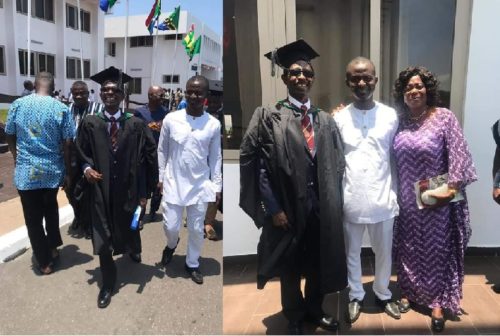 The general Secretary for the opposition National Democratic Congress, Johnson Asiedu Nketiah popularly known as general mosquito has graduated with a Masters degree from the Ghana Armed Forces Staff and Command College.

General Mosquito who has an accounting and finance background has decided to pursue a Master of Science in Defence and International Politics (MDIP) programme.

Pictures of him with some family and friends has flooded Social Media with the chief scribe of the opposition wearing a wide grin on his face.

Johnson Kwadwo Asiedu Nketia popularly known as General Mosquito (born December 24, 1956) at Seikwa, is a Ghanaian politician and the current General Secretary of the National Democratic Congress party. He was Member of Parliament for the Wenchi West constituency for 12 years, from 1992 to 2000.

When Ghana decided to change to constitutional rule, Asiedu Nketia was elected to the Consultative Assembly which drafted the 1992 Constitution and his performance at the assembly earned him the accolade “Heavy Weight”.

Upon his election to the Consultative Assembly, he resigned his position as Bank Manager and was almost immediately engaged as an Investment Analyst by the National Trust Holding Company Ltd. (NTHC).

Here too, he had to combine his duties at the assembly with a Stock Brokerage Investment Analysis course at the Ghana Stock Exchange on a part-time basis. Upon graduation, Asiedu Nketia was adjudged the best student not only for his class but also for the whole period since the course was established.