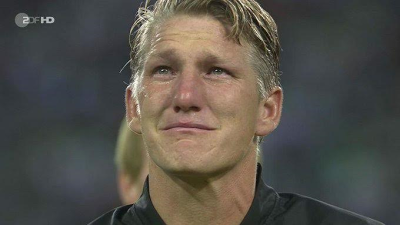 German football legend Bastian Schweinsteiger could not hold back the tears last night as he was honored by the German FA in his last game for the German team.

The former Bayern Munich midfielder and World Cup  winner has become surplus to requirements at Old Trafford after being banished to play with the youth team and being told by Manchester United new boss, Jose Mourinho that he has no future at the club.

After 12 years and 120 caps, in an international career which culminated in him winning the World Cup in 2014, Bastian decided to hang up his international boots in last night's friendly versus Finland.

And it was very emotional for the midfielder who could not hold back the tears once the fans started chanting his name.