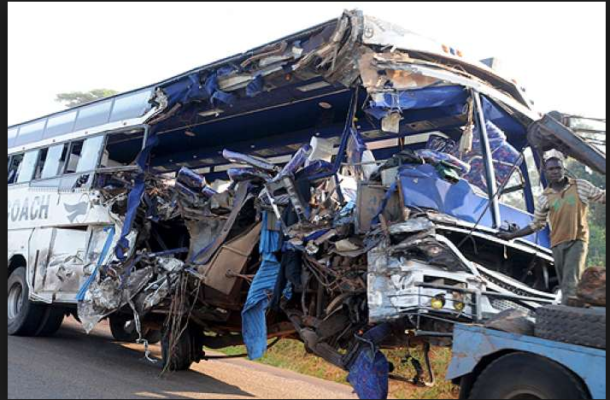 Accidents in Ghana are among the dealiest in resent times

The bus fire in Kazakhstan in which 52 people were killed yesterday is among the deadliest bus accidents in the world over the past five years.

Here are some of the other accidents. 2018

Peru: Fifty-two people die in January when a bus plunges 100 metres over a seaside cliff after colliding with a truck on a precarious stretch of road known as the “devil’s curve”. The accident is about 45 kilometres from Lima. 2016

Ghana: A government-operated passenger bus collides head-on with a truck carrying tomatoes in February, leaving 61 people dead and 25 critically hurt. Investigators say the bus, heading to the northern town of Tamale, appeared to have been speeding.

Afghanistan: In May, 73 people are killed when two passenger buses and an oil tanker burst into flames in a head-on collision in the eastern province of Ghazni.

Many of the dead, including women and children, are burned beyond recognition. 2015

Brazil: A tourist bus leaves a twisting mountain road and plunges 400 metres to the bottom of a densely wooded ravine in southern Brazil, leaving 54 people dead. The accident is near the town of Campo Alegre. 2014

South Sudan: Fifty-sixpeople are killed when a bus and a truck collide while crossing a bridge on the highway south, about 25 kilometres from capital Juba. 2013

Zambia: Fifty-three people die in a collision between a bus and a truck in February, 100 kilometres north of Lusaka.