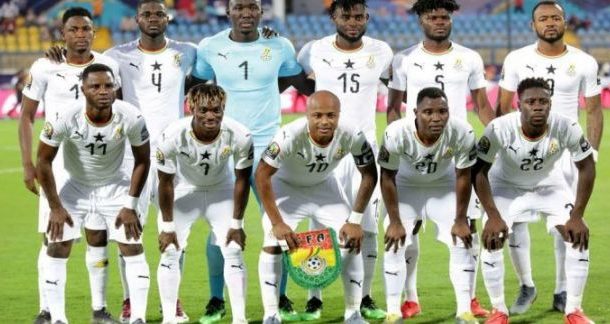 After a couple of disappointing Africa Cup of Nations campaigns, Ghana will seek redemption in this winter's instalment in Cameroon.

Unlike other star-studded rosters, such as Senegal and Algeria, Ghana cannot call upon a bunch of household names, though they have a few exciting stars in their ranks.

Milovan Rajevac's men have been given outside chances of winning their first continental crown since 1982, but the Black Stars will still fancy their chances in Cameroon.

Arsenal star Thomas Partey has soaked up the limelight as Ghana's standout midfielder ahead of the upcoming tournament following his inspiring first half of the season in the Premier League.

Following a topsy-turvy maiden campaign at the Emirates last term, the 28-year-old has hit his stride this season, growing into one of Mikel Arteta's most valuable assets.

Partey's typically high-octane performances, coupled with tactical awareness and pinpoint passing, make him one of the finest talents Ghana have had to offer in recent years.

The sons of the legendary Ghanaian playmaker Abedi Pele - Jordan and Andre Ayew - are two of the longest-serving stalwarts in the current Black Stars squad.

Andre, currently on the books of Qatari outfit Al-Sadd, has recorded 100 international appearances for Ghana, scoring 22 goals in the process, more than any other active Ghanaian player.

Meanwhile, Jordan, who has been Patrick Vieira's first-choice striker at Crystal Palace this season, trails his older brother by four international goals, though he has 'only' 73 outings under his belt.

The Ayew brothers have scored more international goals between the two of them (40) than the entire Ghana team combined, and they are expected to shoulder the scoring burden in this month's competition.

Rennes' teenage sensation Kamaldeen Sulemana has taken Ligue 1 by storm this season, with his devastating pace and fancy footwork making him one of the most sought-after wingers in Europe's top-five divisions.

The lightning-fast 19-year-old has racked up five goals and two assists in 25 club appearances this term, attracting interest from several top clubs, including Liverpool and Manchester United.

Capable of playing anywhere along the frontline, Sulemana could be one of the AFCON 2021 revelations as part of his bid to cement his reputation as a generational talent.

Rajevac could utilise the prodigious forward on either flank, allowing the Ayew brothers to go more central and focus on delivering the goods inside the box.

Ghana's Africa Cup of Nations 2021 journey is due to get underway on January 10 when they take on Group C favourites Morocco at the Stade Ahmadou Ahidjo in Yaounde.

Though they will head into proceedings as pre-match outsiders, the Black Stars can draw confidence from keeping the Moroccans at bay in both previous AFCON H2Hs.

Eking out a positive result against the likes of Romain Saiss, Achraf Hakimi and Youssef En-Nesyri would be a massive confidence boost going into the remaining two group stage fixtures.

While Rajevac's side can ill-afford to return nothing less than three points against Comoros if they are to optimise their chances of progression, a match-up with Gabon could prove rather tricky.

The Ghanaians have won both previous meetings with the Panthers, but it is worth noting that nations last met in an international friendly over a decade ago.

Yet, Gabon struggled in the build-up to the tournament, going winless in their last three games on the trot.

But they deserve the benefit of the doubt after finishing runners-up in the AFCON qualifying Group D ahead of DR Congo and Angola.

Overcoming the group phase is only the first step of the road.

But after successfully negotiating their last seven AFCON group stage campaigns, Ghana will feel confident of reaching the knock-outs and a must-watch for fans using soccer streams to catch their team’s games online.

Despite losing 3-0 to defending African champions Algeria on the eve of the final tournament, the Black Stars will be daring to dream that this could be their time to shine.

That defeat, however, suggests there is still a huge gap between Rajevac's side and the best African nations, dousing the nation's optimism ahead of the competition.

As long as they manage to avoid the likes of Algeria, Egypt and Senegal in the knock-out stages, Ghana will believe in their chances of going the distances in Cameroon.