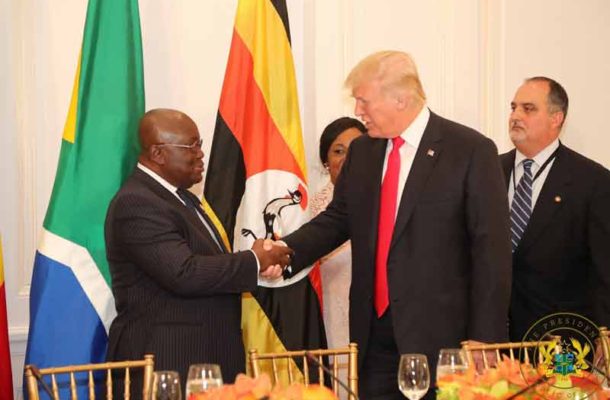 PRESIDENT Trump’s recent defeat in his effort unilaterally to alter the status of Jerusalem in defiance of international law highlights the nature of the relationship between the United States (US) and African countries.

The US ambassador to the United Nations (UN) let it be known before the vote on the General assembly resolution that Donald Trump will take personally any opposition to his policy on Jerusalem.

The President himself has made allusions to countries that take American billions and then do what they like.

In effect, the US is monetising loyalty to President Trump.

American frustration with the UN is not new.

There were similar immoderate reactions to resolutions that went against State Department policy in the 1960s when Burkina Faso (then called Upper Volta), Nigeria, Ghana and Guinea, four of the 36 African countries that voted for the resolution to uphold international law on Jerusalem’s status (outnumbering African abstainers and no-shows combined) showed independence of thought from the US.

Then, as now, American money had been wrongly assumed to guarantee deference to the State Department.

Among the many issues in contention in the 1960s were (i) admission of Communist China to the General Assembly, (ii) African arms proliferation, and perhaps most important of all, (iii) régime-change in Congo by the removal of Patrice Lumumba, Congo’s newly elected leader in favour of his opponents backed by Belgium, the UK and the United States.

During the Congo crisis, the US paid a substantial proportion of the cost of the UN peacekeepers in Congo (40 percent according to David N. Gibbs and 50 percent according to Secretary of the Treasury, Robert Anderson) and grew increasingly disgruntled with its inability to dominate the situation.

“The President said one of our most serious problems soon would be the determination of our relations with the UN. He felt the UN had made a major error in admitting to membership any nation claiming independence. Ultimately, the UN may have to leave US territory. (Foreign Relations of the United States, 1961–1963, Volume XX, Congo Crisis, Document 4, Editorial Note.)

The Administration felt itself to be in a strong enough position to demand staff changes at UN Headquarters and to determine the composition of United Nations Operation, Congo (UNOC) in order to attain its objective of dictating political developments in that country.

Meanwhile, African countries in favour of reinstating Lumumba attended a conference in Casablanca and discussed withdrawing their troops from UNOC in protest of Lumumba’s treatment.

In a telegram to the US mission to the UN dated January 12, 1961, the Department of State said:

“You should approach SYG [acronym for UN Secretary General] soonest with view obtaining his full assessment current situation in Congo.

“In course discussion you should make following points:

US greatly concerned that situation in Congo has seriously deteriorated despite fact UNGA [United Nations General Assembly] has accepted Kasavubu authority and UN has nearly 20 000 troops stationed in Congo.

Pro-Lumumba elements, with outside support contrary to UN resolutions, extending their influence to substantial part of Congo territory.

“We are especially disturbed at reports, as yet unconfirmed, that participants Casablanca Conference secretly agreed there should be coup d’etat in March in which their troops would be used outside UNOC framework to assist in restoring Lumumba to power, confronting UN with fait accompli.

“We believe SYG should be reminded strongly that if Congo falls under Communist domination while UN sharing major responsibility for security of country, the results in US public and Congressional opinion likely to be extremely damaging to UN.

“We, therefore, request he consider taking all necessary steps to rectify situation. Following are concrete suggestions we hope he will consider urgently:

+ Replace Dayal soonest (emphasis added). As result series of incidents, we have no doubt Dayal’s sympathy for return Lumumba and that his conduct of UN operations reflects this bias. We believe his removal too long delayed, and that Dayal’s activities have contributed substantially to deterioration of situation in Congo.

+ Now that Guinea has requested withdrawal its troops from UN Command, we believe SYG should consider encouraging withdrawal of those other contingents who have proved most unreliable and who threatened withdrawal anyway. In particular, Ghana, the UAR and perhaps even Morocco.

During this time the US reconsidered its relationship with the UN.

It was uncomfortable with the new African membership which displayed a trait of voting independently of the American position.

“The President said one of our most serious problems soon would be the determination of our relations with the UN. He felt the UN had made a major error in admitting to membership any nation claiming independence. Ultimately, the UN may have to leave US territory. (emphasis added)”

By the time the National Security Council (NSC) was being told this, the Department of State together with the Central Intelligence Agency and the US ambassador to Congo, Clare Timberlake, had established contact with one Colonel Joseph Mobutu, commander of the Congolese army loyal to the administration in Leopoldville.