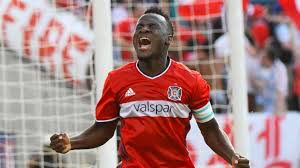 Ghana forward David Accam has expressed his delight after scoring his debut goal for Philadelphia Union as they beat his former side Chicago Fire in the Major League Soccer on Thursday morning.

The Union gave up three leads before finally pulling away for good in the 6th minute of stoppage time thanks to a solo effort from the Accam to earn a 4-3 win over Chicago Fire on the road.

Accam’s first MLS goal for the Union capped off a wild conclusion to the match that included a Bastian Schweinsteiger equalizer three minutes into stoppage time.

The 27-year-old in his first appearance at Toyota Park since his spring move from the Fire tore apart Chicago’s backline in the 95th minute of the match.

Watch Accam’s interview after the match below: