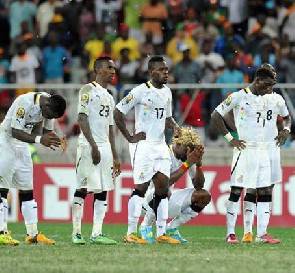 The Black Stars commenced their 2018 FIFA World Cup with a 0-0 draw at home after a stodgy performance against Uganda at the Tamale Sports Stadium on Friday afternoon.

The three-time World Cup finalists lacked creativity and spark as they created few chances in their opening Group E contest.

The first attempt fell to Uganda in the second minute when Denis Iguma profited on Daniel Amartey's faulty clearance from inside the box but the latter's effort at goal went wide for a goal kick.

Four minutes later, rght back Nicholas Wadada made a deep run and whipped in a cross but goalkeeper Razak Brimah, unchallenged, dived to collect.

Winger Faruku Miya cut in from the left and fired a shot with his right but it was wide on 28 minutes.

After the half hour mark, the Black Stars sprang to life and started driving the screws on the Cranes.

Aston Villa forward Jordan Ayew lacked precision to convert Ghana's first chance of the half when right back Harrison Afful made a run and flighted in a cross but his connection was wide.

Three minutes away from the half-time whistle, captain Asamoah Gyan nearly scored against the run of play when chested down a cross from the left n delivering a snap shot.

On the 45th minute mark, Panathinaikos midfielder Mubarak Wakaso set up Atsu but the latter's shot was off target.

In injury time, the best chance fell to to Atsu who wriggled his way into the Cranes box but his decision to go for glory instead of setting up Ayew and Frank Acheampong kept the scoreline blank.

There was a bit of urgency in Ghana after the break by pinging the ball around and opening up the visitors.

Ayew won a free-kick from 20 yards but Gyan's curled effort went straight into the arms Onyango.

Ghana were forced to make a first substitution when Afriyie Acquah came off after picking an injury and was replaced by Emmanuel Agyemang.

The Black Stars tried turning on their style and Leicester City's Amartey forced Onyango to finger tip his header from a corner kick.

Khalid Aucho tucked Atsu close to the box and picked up a yellow card but Wakaso skied his take.

Ayew was teed up by Gyan's back header but the Aston Villa man was pushed down for a free-kick but it was wasted.

Then Acheampong went on a break and slid in a pass which elude Gyan but found Badu at the far and the Udinese fired a shot which deflected for a corner.

Chances were few for the Black Stars but won a lot of set pieces close to Uganda's area but were far from clinical.

Gyan was still searching and came close with a header on the 90th minute mark to fire blamk.

It was a deserved point for the visitors who were never cut open by their hosts.