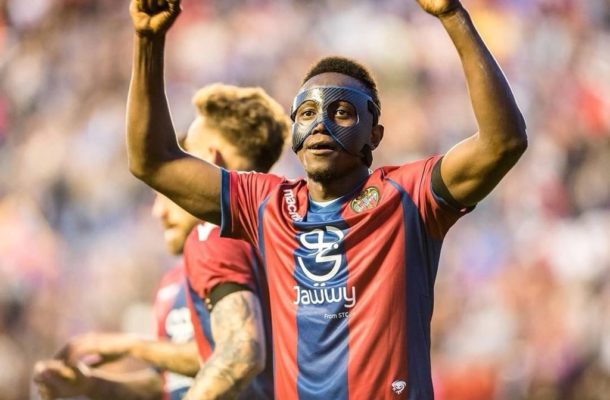 Ghana international  forward Emmanuel Boateng has set his sights on a big move to Manchester United or Barcelona in future.

After joining UD Levante on a four-year deal last summer, Boateng had to be patient as he waited for regular opportunities to impress.

Once given those he finished the season in style, with a hat-trick against Barcelona which ended a record-breaking unbeaten run for the La Liga champions.

The 22 year old  is now looking to kick on, telling Spanish tabloid Marca of his future plans: “As an upcoming young player, I always dream big. I see myself playing in one of the biggest clubs in the world in the next five years”

“Big clubs like Manchester United or Barcelona will always excite me.”

Boateng netted on his debut for Ghana in their 2-0 win over Japan in an international friendly last week.