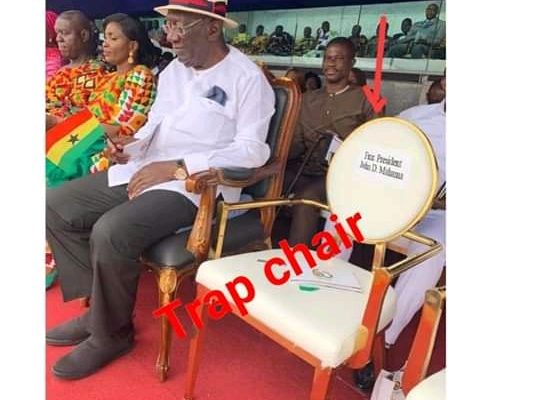 In Ghana today we have three former Presidents, John Kuffour, Jerry John Rawlings and John MAHAMA. All these three were invited to the 63rd anniversary in Kumasi.

One out of the three attended this year’s independence anniversary in Kumasi. I believe my two former Presidents have tangible reasons for not attending because President Rawlings was in Sogakofe to celebrate the day with his people and so was John Mahama equally engaged with other equally very important activities

Surprisingly they placed a chair with John Mahama's name just to call him unpatriotic.

The question is why didn't they do same to our founder if they have balls in between their legs?

During the 62nd celebration in Tamale President Kuffour couldn't attend, did they advertise his chair as they did to our incoming President?

They know by themselves why it has pained them so much so that they have forgotten to discuss the empty speech of the President but talk about our incoming President, John Dramani Mahama.

This clearly shows how Mahama swerved their Juju they placed on that chair for it to affect his fortunes in the December polls.

We thank God who gave wisdom to the handlers of the President to swerve the Juju Owusu Bempa gave them to place on that special chair. I wish to even advise further that President Mahama’s handlers should henceforth ensure they carry his own chair to every state function he will attend

Why didn't they allow Freddy Blay to sit on that same chair but decided to change it and brought a different one for their Chairman?

God will always be Supreme.

Am Still A Citizen Not a Spectator.