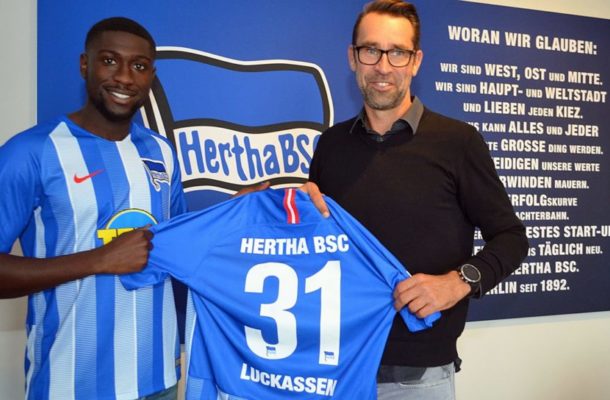 The defender joins the German club after struggling to break into the PSV team since arriving in 2017.

Hertha Berlin confirmed the capture of the Ghanaian on their official website and have an option to make the move permanent.

“With Derrick’s arrival we’re getting a player with a very good mentality, who gives us even more options in defence, especially at centre back,” said manager Michael Preetz.

“He’s been a target of ours for a while now, as his tackling and heading capabilities, as well as his ability to open the game up, fit our play style really well.”

Meanwhile, Luckassen says his move to Germany was the right one for him as he seeks to gain more play time.

“I was instantly certain that Hertha would be the right step for me. I’d like to win a lot of games with the team and finish as high up as possible in the table,” said Luckassen, looking forward to his new challenge in Berlin.

Luckassen began his football career at FC Amstelland, before moves to AFC Amsterdam and then AZ Alkmaar in 2007, where he progressed through the youth setup. In 2014, he made his debut as a first-team player in the Eredivisie, making eighty-four appearances for Alkmaar.

He also played in thirteen Europa League matches for the club. In the summer of 2017 he transferred to PSV, winning the Eredivisie in his first season. Luckassen, who has both Dutch and Ghanaian citizenship, has played nine times for the Dutch U21s, where he also played alongside Karim Rekik. As well as his preferred position of centre back, Derrick can also play at right back and as a defensive midfielder.