Ghanaian detainees in Libya visited by Ghanaian embassy in Libya 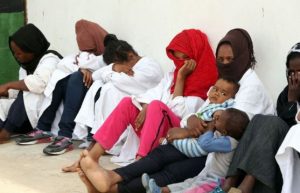 The Ghanaian embassy was part of a team of seven other West African embassies in Libya brought together by the International Organization for Migration (IOM) to visit the immigration detention centre.

The centre is believed to be holding about 350 refugess from West African countries like Senegal, Cote d'Ivoire, Guinea Conakry, Ghana, Nigeria, the Gambia and Chad who may have fled to Libya in pursuit of "greener pastures".

“The visit was a subsidiary of IOM’s European Union-funded project: ‘Repatriation Assistance for Vulnerable Migrants Stranded inside Libya and Promoting Stability in Libya’s Southern Regions’,” the IOM report said.

The European Union announced last week of its plans to to extend its Border Assistance Mission (EUBAM) in other to stop further migration of refugees from Africa to European countries.