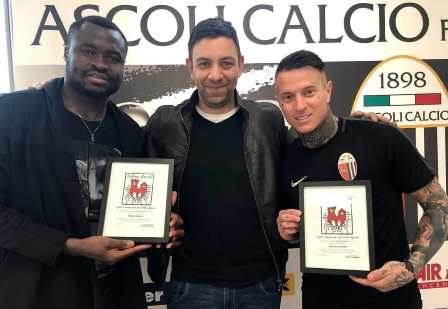 Ghana international Bright Addae has been honoured for his humanitarian work by the the Pichio Village Sports Centre.

The Italy-based Ghanaian midfielder was recognised for his role in supporting the needy in the society through his Bright Addae Foundation.

The pair played varying roles in their various societies with Bright Addae supporting a number of projects in his country Ghana.

A statement from Ascoli Picchio highlighted the contribution of the two players outside the pitch as they continue to give back to the society.

"For having shown, through their commitment, respect and love for the city of Ascoli Piceno", part of their citations read.

The former Wa All Stars midfielder remains an integral figure in the set up of Ascoli Picchio and has played a chunk of the game time in the current season despite a slow start to the campaign.

He was part of the 2009 FIFA U20 team that won gold in Egypt under Sellas Tetteh.