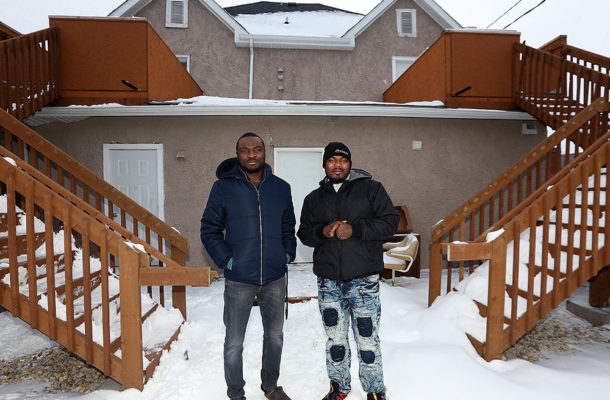 Seidu Mohammed (left) and Razak Iyal pose for a photograph in the backyard of Iyal's apartment in Winnipeg on Wed., Dec. 20, 2017. The two men from Ghana lost nine fingers between them after walking across the United State/Canada border last Christmas Eve. Kevin King/Winnipeg Sun/Postmedia Network

Seidu Mohammed and Razak Iyal couldn’t go back to Ghana, out of fear of persecution, and they couldn’t stay in the United States without facing deportation. So on Christmas Eve 2016, they headed north from Minneapolis to the Manitoba border and Canada beyond. It was a brutally cold December night. The men walked for hours. A trucker discovered them beside Highway 75, near Emerson, Man., half-frozen, expecting to die.

Seidu Mohammed spoke with Joe O’Connor by phone from Winnipeg about a journey that irrevocably changed two lives.

“I met Razak in Minneapolis at the Greyhound bus station. We didn’t know each other, but he was the only other black guy in the station, and so I went to him and I asked where he was from. He said Ghana, and I told him I was from Ghana, too, and we started speaking our own language. He said he was going to Canada. I was going there, too. It was a coincidence, and we took our plan together — and we made our journey.


“We saw a taxi outside, and told the driver we were going to the border. He told us we had to pay $200 each. He dropped us near Grand Forks, and said if we walked for 30 minutes we would be at the border. But it wasn’t 30 minutes. I had a winter jacket, a baseball cap, some winter boots — but the winter boots weren’t good for Canada. I was wearing gloves. I never knew it was colder in Canada than the United States, because in the United States, in Ohio, where I had lived, that was what I wore — a baseball cap and a jacket. Razak was wearing the same thing, a jacket — a hoodie.

“Even though I had passed through jungle, I had never travelled in a winter like this. There were no houses, only trees and snow. We started feeling the cold more as we got closer to the border. I’d never seen that kind of cold before, windy and cold. It blew my baseball cap away, and took my gloves from my hands.


“We saw a big farm close to the border, piled in snow, beyond our waist. Every step took time — because you can’t lift your leg. My eyes starting freezing, I couldn’t see. Razak had to show me the way — I was following his steps, step by step. Every time we saw a car we would hide in the snow — there were U.S. patrollers around — and all that time my eyes were frozen.


“Razak finally said, ‘We should give up.’ And I said, ‘Yes, we should give up, and anything that has happened here — it has happened for a reason.’ We had tried our best to survive, but this was how it was going to end. We cried, and we prayed, and we were about to sit down in that snow, because we knew we were going to die in that cold.

“But we saw this big truck, and we were waving, and he stopped. It was 4 or 5 a.m. We told him we needed help. His name was Franco, a Polish guy, from Poland, and he can’t speak English that well, but he is a Canadian. He put us in his cab. We felt like he had been sent to us from God. So many trucks had passed — we were going to die — but he stopped.

“The ambulance and police came. At the hospital, they said they had never seen such frostbite before. The pain I was in, I don’t know how to describe it. All I felt was pain, pain from my fingers — and pain in my hands. The doctors and nurses came to my room. They told me I was going to lose my fingers. My fingers were black. All the tissue was dead. There was nothing they could do.

The pain I was in, I don't know how to describe it


“I started crying. I had come to Canada to work. I had come to make a new life, and I was saying, ‘How can I work if I am going to lose my fingers?’ But all the doctors said I would be OK. They took me to the surgery room on Jan. 20, and when I woke up my fingers were gone. (Doctors were able to save Razak Iyal’s right thumb).

“Right now, I am going for therapy — and it is what it is — and our lives have changed totally. But, all we have to say is, thank God we are alive.

“We are trying to find a way to contribute to this country, to work hard – and pay our taxes — and follow the rules and be a part of this country. Everything is going well, but it will take time. I don’t regret coming to Canada, because what if I had made it — and I didn’t lose my fingers? So I don’t regret it, because I know what I would have faced if I had gone back to my country, and even through these difficulties there are a lot of good people in Canada, people who are encouraging us, people who are making sure we are OK.”