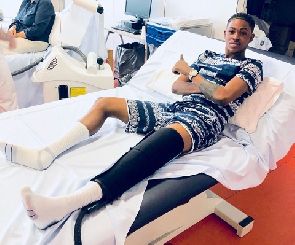 Manchester City-owned Aminu Mohammed is heading to NAC Breda in the Netherlands for pre-season ahead of a proposed loan move.

The English Premier League giants are reported to have signed the Ghana U17 star for a fee in the region of about £2million.

He has already spent time in Breda, having trained with NAC last December.

The 18 year old scored three goals in four matches for WAFA SC this season and was named GHPL Player of the Month for March.