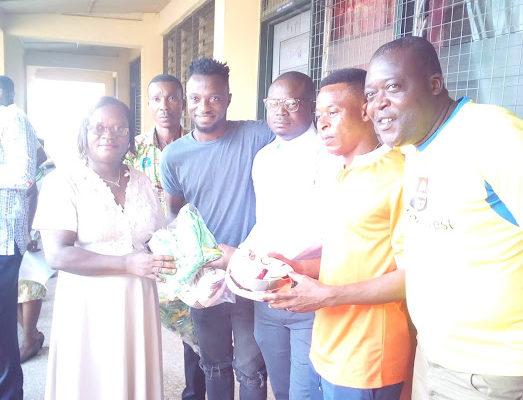 Ghana International Mohammed Tijani has donated a new set of football Jerseys to his former school,  Takoradi Technical Institute (TTI), promising to do more for the institution that brought him to limelight.

The 28-year-old's kind gesture also include three footballs, a set of socks and bibs as his contribution and support to the school.

The former Metro FC stars striker, who currently plies his trade at Faroese Island's side B71 Sandoy, said Monday's donation to TTI marks a  "beginning of good things" for his alma mater.

Tijani was a member of the 2009 group and enrolled in the school on a scholarship,something he says evokes a "great feeling."

"The biggest motive behind this move is to appreciate what the school has done for some of us," he told ghanaguardian.com.

"It is always a great feeling to be back at where we all started, exactly we were given scholarships to school and brought to limelight in our football career."

"Once the school has created opportunities for us to make it to the top, the onus lies on us to also do it for the younger ones.
"And I can assure you that the is the beginning of greater things to come," he added.

He said he was giving back to TTI what rightfully belongs to TTI, as the school made him what he is today

He showed his appreciation to the school and urged students to combined sports and academia perfectly.

"This my little contribution and support to the school, where we got the opportunity to study and showcase our talents,"he said

"Am also much grateful that to have passed through the school," .

"Once you'v found yourself here, then you are on the straight,hence I will urge all of you to take your lessons serious."

Receiving the items on behalf of the School at a short presentation held at the forecourt of the institution, the Principal,Mrs Sarah Andah Monney, described Tijani's move as "exemplary"

"We will say thank you to Tijani for what he has done today, she said.

"What he has done is exemplary and an indication that he recalls and appreciate what the school ha done for him.

"Like Oliver Twist, we will ask for me and urge other old student to emulate what Tijani has done.

Presentation was done at the forecourt of the school

Leading the entourage to the school was Coach William Papa Yenzu Quansah,an old student and  a former Coach of the Institute who trained  Tijani Mohammed during his days at TTI.

He described Tijani as "humble and intelligent." when he selected him to be part of the triumphant TTI football team.

He was an electrical student, very humble and intelligent on the field of play and in classroom, Coach Yenzu said.

"He was a good Striker, I discovered him through inter departmental.He is Hardworking guy and very calm person.

Tijani Mohammed started his career at Future Stars and moved to Sekondi  Metro Sporting Club, which is now under the name Karela United.

During his days at TTI he played along side with players like John Antwi of El makasa, Ahmed Mohammed and Ekow Annan George formerly of  king Faisal.

He won two inter school and colleges trophies, one regional trophy and qualified Takoradi Technical Institute under then trainer William Yenzu Quansah in 2006.