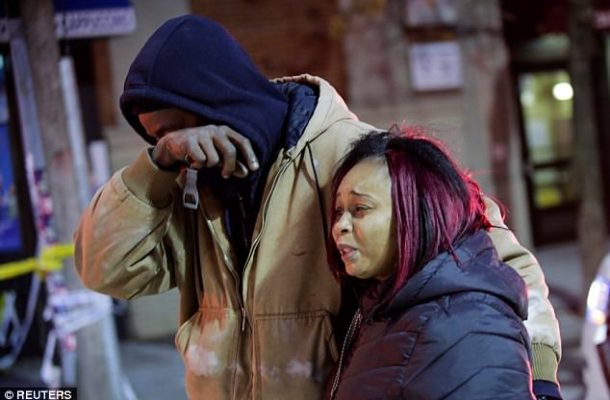 Ghanaians in New York are mourning the deaths

Ghanaians in New York have been thrown into a state of mourning after six of their fellow citizens were killed in the Bronx fire that claimed the lives of 12 people.

A family of three were among the six Ghanaians killed in the fire in the New York suburb sparked by a 3-year-old child who was playing with a stove.

Army soldier Emmanuel Mensah, 28, Gabriel Yaw Sarkordie, 48 and Justice Opoku, 54 were the other Ghanaians who perished in the fire at the apartment in Bronx.

All the six Ghanaians were caught up in the fire in their apartment as they sat unaware that the inferno had engulfed their homes.

The deaths has left the Ghanaian community in New York devastated over the number of their fellow nationals who perished in the fire.

"All Ghanaians here in New York are in a state of shock after learning that our fellow countrymen were caught in the fire Bronx," Edwin Sarfo, Ghanaian resident of Bronx told Ghanaguardian.com.

"There are lots of Ghanaians in the Bronx and we are sad about this tragedy that has hit us very hard. We are also planning on a church service at the weekend."

A 3-year-old boy's screams alerted his mother that a fire had erupted in their first-floor apartment in the Bronx on Thursday night.

The boy had been playing with the burners on the kitchen stove, New York fire officials said.

When the mother fled the burning apartment with the boy and his 2-year-old sibling, she made a fatal mistake -- she left the apartment door open.

The tragic result was the deaths of at least 12 people, including at least four children, the New York Police Department said.

It was the deadliest fire in New York City in more than 25 years.