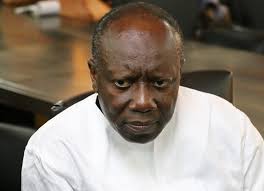 A renowned US based Economist has slammed Ghana's Finance Minister Ken Ofori-Atta for adopting a "reckless" economic strategy that "startles investors", saying Ghana is "fast-becoming the epitome of economic fantasyland".

Philippe Lacoude has predicted that apart from South Africa, Ghana is the next country whose currency could be  downgraded to ‘junk’ status adding that the "country is becoming a byword for fiscal irresponsibility".

"Since coming to office in early 2017, Ghana’s Finance Minister Ken Ofori-Atta has ridden roughshod over traditional norms of how to responsibly run an economy. The country is becoming a byword for fiscal irresponsibility," Philippe Lacoude said in a report published by the Dailycaller.com

"Ghana’s public debt currently stands at well over the unofficial danger level of 70% set by the IMF for low-tax economies."


The Washington-based economist has also  chided the NPP Government's unilateral role to reverse the Ameri deal due to its "wanting retribution against the previous government ".

He also ridiculed the Government's inability to meet its targets over  the issuance of a US$820 million of 10-year bonds, which was undersubscribed even after it was extended.

"Massaging public accounts, reneging on contracts and attempting to borrow your way out of trouble – in this case using separate companies with no sovereign guarantee – is reckless. Unfortunately, it characterizes many Sub-Saharan economies, of which Ghana is becoming one unfortunate poster child," he said.

Ten years after the global financial crisis — precipitated by a debt binge on a monumental scale — it seems we are right back to where we started from: a massive debt crisis.

While the inability of developed economies to balance their books has had serious long term economic and political consequences, we are looking at something even more concerning as we delve into statistics for developing countries.

According to the Institute of International Finance, there has been a $3 trillion borrowing binge in the developing world. With interest rates going up, borrowing costs across mature and emerging markets are on the rise, threatening short-term debt issues in emerging markets. The worst culprits are countries in sub-Saharan Africa.

It gets worse. The credit rating agency Moody’s has now announced that many sub-Saharan countries will not be able to rollover their maturing public debt in the next decade. Unfortunately, most of the region’s debt is expected to mature during this period — potentially joining South Africa’s local currency debt, which was recently downgraded to ‘junk’ status by Fitch, among others.

But there is another country that has recently been singled out by Moody’s and is fast-becoming the epitome of economic fantasyland. That country is Ghana.

Since coming to office in early 2017, Ghana’s Finance Minister Ken Ofori-Atta has ridden roughshod over traditional norms of how to responsibly run an economy. The country is becoming a byword for fiscal irresponsibility.

Ghana’s public debt currently stands at well over the unofficial danger level of 70% set by the IMF for low-tax economies.

This is perhaps why in his November budget speech, Ofori-Atta emphasized that the government, in a newfound era of fiscal prudence, had reduced the country’s debt burden from 72.5 percent at the end of December 2016 to 68.6 percent at the end of September 2017. On the face of it, a 3.9% drop.

Yet, as one looks at the details, something extraordinary appears. The supposed debt reduction took place while the country is going to end the year with a fiscal deficit of 6.3 percent of GDP. The real GDP growth, officially 7.8 percent — and only 4.8 percent if the oil sector is excluded — cannot explain the discrepancy. The high inflation — over 15 percent — does not help balance the debt reduction claim either because interest rates are so high. In fact, in Ghana interest payments on the debt represent almost half of the tax revenues!

It gets worse. With fiscal problems, the Ghanaian Finance Ministry has trouble paying its contractors, especially in the energy sector. Ghanaian banks, foreign investors and other financial institutions have seen almost no adherence to payment schedules for vital projects, which they funded to keep the lights on in the country.

A good example is Ameri Energy, a United Arab Emirates-based energy firm, which was brought in to supply emergency power turbines in 2014 to solve the national electricity crisis. The new Ghanaian government – encouraged by MPs wanting retribution against the previous government – want to rip up the deal. At recent parliamentary hearings, it transpired that AMERI is now owed $40 million, and has not been paid in full since February.

This kind of practices startles investors: during a recent offering for US$820 million of 10-year bonds, the government significantly missed its target, even after extending the offer by a week. Investors did not trust the new Special Purpose Vehicle – a separate company that can borrow on behalf of the government, but keeps the debt off the nation’s books. In the end, despite coming at 19.5% interest, the offer was undersubscribed.

International investors are not easy to con and the plight is borne by ordinary Ghanaians. The government’s refusal to pay its bills is leading to a liquidity crisis in the banks – which means less entrepreneurs and small business have access to lending and the economy is slowly suffocated. A multitude of Ghanaians have gone unpaid in months.

Massaging public accounts, reneging on contracts and attempting to borrow your way out of trouble – in this case using separate companies with no sovereign guarantee – is reckless. Unfortunately, it characterizes many Sub-Saharan economies, of which Ghana is becoming one unfortunate poster child.

To stave off disaster, Ghana and other debt-laden African economies need to free up their economies. According to the Heritage Foundation’s Index of Economic Freedom – which tracks economic liberty around the globe since 1995 – Ghana ranks 118th. Worryingly, it is also amongst the countries which have recorded the sharpest drop in index points.

The Heritage Foundation rightly laments judicial ineffectiveness and government corruption. Ghana must reverse course and honor financial obligations of the previous government and not try to hoodwink investors. It must also put its financial house in order: despite having most of its foreign debt canceled in 2005 under the Heavily Indebted Poor Countries program, Ghana was singled out by Moody’s as most vulnerable to a sudden loss of access to markets or a rise in borrowing costs, due to government debt.

Mr. Ofori-Atta and African finance ministers like him must surely remember the 2008 crisis: you can ignore reality or fiddle the books all you want, but the tyranny of numbers will always catch up with you.

Philippe Lacoude, PhD, is a Washington, D.C.-based economist who specializes in public finance and economic modelling.

John Warmann 3 years ago
This write-up sounds exactly like the opposition NDC's rantings about the Government. They smell so badly in the article. The 70%HIPC threshold was reached some three years ago, everybody knows that Ghana has been shortchanged on Ameri and the Government is trying hard to re-engineer the colossal debt left by the previous government whilst keeping the economy going. The opposition can go hang. The present administration is undoutably better at managing the economy.
Hominid hope 3 years ago
I believe if you a true Ghanaian you would have rather appropriate ameri energy for solving dumsor which government is taking credit for, please before you talk on superchange check other power producers how much the charge per kilowatt per hour, which after 10 years it will be taken back but ameri energy after 5 years Ghana own the plant for ever and make money than Ameri energy.
Kwame 3 years ago
We thank God we have a renown economist, BAWUMIA, Phd lets support support him in prayers. Also, not every cheap deal its good. Moreover, after 4 years, they would account and we shall judge them,but now, as we have entrusted power in their their hands, lets support them in prayers so that they this economy for the betterment of u and i.
Kwame 3 years ago
So that they *manage* this economy for the betterment for u and i.