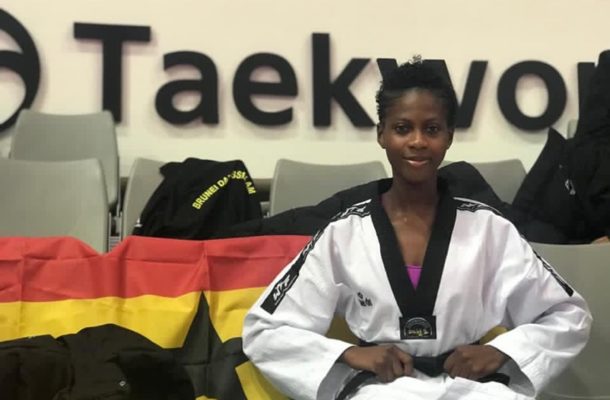 The 21-year old defeated Bernadette Jeminah Jeong of Fiji 20-0 and Syed Sadi Sidra Batool of Pakistan 14-4 in the semis and finals respectively in the -49kg category.

The Nigerian Open Silver medalists achieved the feat after a walk over against a Mexican opponent in the 2019 Championships which was held at the Taekwondowon on Wednesday, November 13, 2019.

Apart from the Gold medal, she received a Certificate and Dobok at the Annual championships.

Henrietta, whose video was chosen by the Embassy of the Republic of Korea among 3 others to represent Ghana, tells TalksenseSports she was determined to make it count.

"Sometimes when disappointment makes you stronger. I am excited about everything, the atmosphere at the Korean Ambassador's Cup finals was very competitive. The journey wasn't easy right from the beginning."

"I encountered many challenges which could have led to my defeat but with determination, perseverance and motivation, I stayed strong with a focused mind. Because after each game, I want to be able to say 'I gave it all I could, I gave it my best'." She added.

Henrietta has support from Counsellor Selassie Sevor, from the Ghana's Embassy at Korea, who represented the Ambassador H.E. Difie Agyarko Kusi.

The Technical Director, Stephen Amegashie Jnr who coached Henrietta, will partake in a Poomsae Technical Course from November 17-19, 2019.

The victory is a motivation to the Embassy of the Republic of Korea in Ghana, to further strengthen their relationship with the GTF & support to the development of the combat Sport, as the Embassy's yearly sponsored Korean Ambassador's Cup Taekwondo Championships, comes off next month at Tema.