Ghana's Larabanga Mosque 'most sophisticated yet simple architecture in the world' 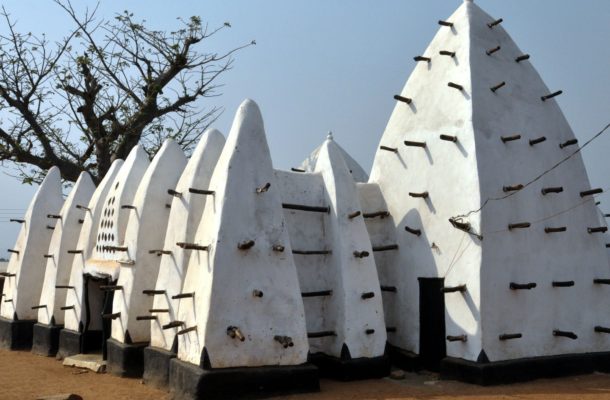 The Larabanga Mosque in Ghana is the 'most sophisticated yet simple architecture' in the world, Researcher and law lecturer, Clara Beeri Kasser-Tee has revealed.

Located in the Islamic town of Larabanga, close to Damongo in the West Gonja District of the Savannah Region, the Private Legal Practitioner says, it is the oldest mosque not only in Ghana but the whole of Africa.

Extolling the virtues of the black people in a post on Facebook, Mrs. Kasser-Tee also disclosed that it's been over 600 years since the edifice was raised.

"The oldest mosque in Ghana. One of the oldest mosques in West Africa, and certainly one of the most sophisticated yet simple architecture in the world. Over 600 years old, I am told," she wrote.

"When you are feeling lost, take a trip to the Savannah Region of our great country. Admire Africa. Remind yourself that we, the black race, come from a great stock, never mind that we may have abandoned a lot of our science and our history. We certainly will rise again," she said.

"And, we were welcomed with lots of love. The African love. No discrimination based on religion, race or gender. One love," sge added.

About the popular Mosque

The Larabanga Mosque has an old Quran, believed by the locals to have been given as a gift from heaven in 1650 to Yidan Barimah Bramah, the Imam at the time, as a result of his prayers.

The mosque, built using West African adobe, has two tall towers in pyramidal shape, one for the mihrab which faces towards Mecca forming the facade on the east and the other as a minaret in the northeast corner.

These are buttressed by twelve bulbous shaped structures, which are fitted with timber elements.

Founded in 1421, it has been referred to as the "Mecca of West Africa". The World Monuments Fund (WMF) has contributed substantially to its restoration, and lists it as one of the 100 Most Endangered Sites.