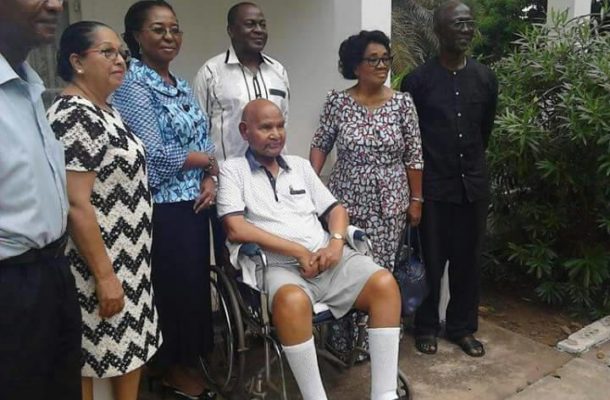 Dr Evans-Anfom was a former vice-chancellor of the Kwame Nkrumah University of Science and Technology (KNUST) from 1967 to 19 73 and chaired many national committees and boards.

He was credited as the originator of matriculation events at universities, which he introduced during his tenure at KNUST.

The celebrated surgeon who was born on 7 October 1919 left behind four children.


His mother, Mary Evans, was the daughter of William Timothy Evans, a teacher-catechist of the Basel Mission Middle School or the Salem School at Osu. The Evans family was a well-known Euro-African Ga family on the Gold Coast. In 1925, he enrolled at the Government Boys School in Jamestown.

He attended the Presbyterian middle boarding school, the Salem School at Osu where the principal at the time, Carl Henry Clerk encouraged him to apply for a Cadbury Scholarship for study at Achimota School instead of going the normal teacher-training route at the Basel Mission-founded Presbyterian teacher training seminary at Akropong, now known as the Presbyterian College of Education, Akropong.

He was elected the school prefect of Achimota School. In January 1939, he enrolled in the inter-preliminary medical course of science at Achimota. In that course, he received advanced training in physics, chemistry, botany and zoology.

At Achimota, he won a Gold Coast medical scholarship in 1941 to study medicine at the University of Edinburgh, graduating in 1947. He also studied in a postgraduate diploma course in tropical medicine (DTM&H), completing in 1950.

A pioneering medical educator himself, he was approached by the first Ghanaian surgeon, Charles Odamtten Easmon in 1963 for a teaching professorship position at the then newly established University of Ghana Medical School, an offer he eventually accepted. He also did medical outreach in the Congo in the 1960s.

In 1996, he was adjudged the “Alumnus of the Year” by his alma mater, the University of Edinburgh for “his major contribution to the development of medicine in the Congo and to medical education in Ghana.” In 1958, Evans-Anfom co-founded the Ghana Medical Association together with Charles Odamtten Easmon, Silas Dodu, Anum Barnor and Dr. Schandorf.