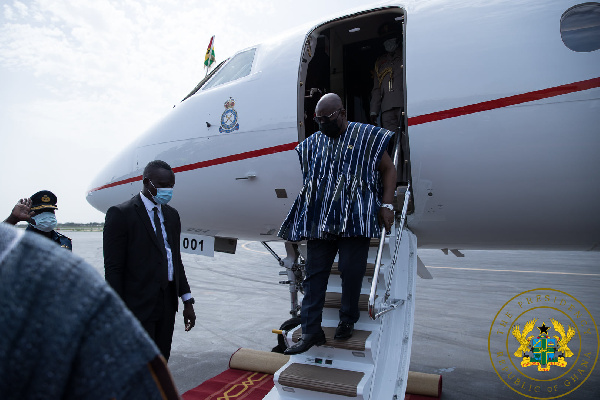 Ghana’s Presidential Jet, the Falcon 900 EX, has become a commercialized vehicle in the airspace of West Africa, running a “tro-tro” scheme from country to country, picking and dropping off Presidents in various countries they desire to visit.

Although the controversy surrounding the use of the jet by the Liberian President, George Weah, is yet to die, another African President, General Umaro Mokhtar Sissoco Embaló of Guinea-Bissau, has been found using the Falcon EX, to attend an inaugural ceremony.

This is the clearest indication of the extent to which President Akufo-Addo, no longer desires the existing French-built Dassault Falcon 900 EX-Easy aircraft and wants a new one.

Last week’s sighting of the jet in use by Guinea-Bissau’s President, is the second in less than a month that PresidentAkufo-Addo, had given out the executive jet to another country.

However, the Ghanaian government has revealed that President Julius Maada Bio of Sierra Leone aside from President George Weah of Liberia, had used the presidential jet.

Ghana’s Foreign Affairs Ministry, last week, flippantly described the use of Ghana’s Presidential by the Heads of State of other countries in the sub-region, as a normal practice, but failed to disclose the terms and conditions under which the aircraft was been given out.

President UmaruSissocoEmbalo of Guinea Bissau was mentioned by the Foreign Minister in last week’s statement, as one of the users of the aircraft, therefore his trip to Sao Tome, onboard this aircraft was not the first time and probably not the last time.

But many people are demanding to know whether Ghanaian taxpayers are the ones paying for the cost of fueling these trips, aside from putting the jet at the disposal of these presidents.

At a time that President Akufo-Addo is renting commercial jets from companies abroad for his foreign trips between US$15, 000 to US$18,000 per an hour, some other Ghanaians, have also demanded to know, whether these Heads of States are paying maintenance costs to keep the aircraft in shape.

The current aircraft, President Akufo-Addo rents, has a movie theatre, a bathroom, as well as bedroom, suggesting that the new one which Defense Minister Dominic Nitiwul is working on to buy, as stated by the Director of Communications at the Presidency, Eugene Arhin, during a press briefing at the Jubilee House on Monday evening, September 27, will have these features.

Mr Arhin had said that the “Government is already in the process of acquiring a bigger jet for use,” adding “the Minister of Defence has made it clear that the government has decided to buy a bigger jet to save us from all these troubles. I wouldn’t want to go into details. I am sure when the Minister of Defence has the opportunity he will do that.”

The Foreign Ministry had claimed that such use of the executive jet is part of bilateral and multilateral diplomatic relations among countries, adding that Ghanaian leaders have in the past also benefited from such gestures from a country like Nigeria.

The Herald had on September 15, 2021, revealed that Ghana’s official Presidential jet, which appears abandoned by President Akufo-Addo, for rented private jets, had been seen in faraway Liberia.

The Falcon 900 EX jet was seen flying the Liberian President, George OppongWeah to Ghana for an Emergency ECOWAS Summit in Ghana on September 15, 2021.

This paper questioned the terms and conditions surrounding the use of Ghana’s presidential jet by the Liberian leader, which is not yet available.

President Weah was being seen off by his ministers at the Liberia airport that rainy morning to Ghana.

The Herald further check has since revealed that Liberia has no presidential jet, and has been in the habit of using private jets belonging to businessmen among others.

The Member of Parliament (MP) for North Tongu, Samuel OkudzetoAblakwa, who took up the report by The Herald, as part of his quest for answers on why President Akufo-Addo, has been renting privately for his foreign trips at outrageous costs to Ghanaian taxpayers, has gotten some response from the Foreign Affairs Ministry.

According to the Ministry, President of Liberia, George Weah, was allegedly allowed to use Ghana’s presidential jet to attend an emergency ECOWAS Summit.

In a statement of response, the Ministry maintained that MrAblakwa’s “insular posture comes as a surprise”.

“In the light of the strenuous and concerted efforts by ECOWAS leaders to broker peace in the region, the Ministry finds it rather unfortunate that Hon. Okedezeto Ablakwa, would seek to deliberately muddy the waters with these negative comments.”

In addition, he says he hopes to get answers on MrWeah’s use of the jet when Parliament reconvenes next month from recess.

But the Ministry of Foreign Affairs has taken strong exceptions to the position taken by MrAblakwa, who is also a ranking member on the Foreign Affairs Committee of Parliament.

“In the latest of such utterances, Hon. Okudzeto Ablakwa sought to suggest that transporting the President of Liberia, His Excellency George Weah, aboard Ghana’s presidential jet to participate in the emergency ECOWAS Summit during the recent political crisis in Guinea, constituted and impropriety. Nothing could be further from the truth”

“It must be emphasized that the practice of sharing travel resources among West African Heads of State and high-ranking officials, is not a recent phenomenon. Indeed, in the past, some Heads of State have, in their capacity as Chair of ECOWAS, extended this courtesy”, the Ministry explained.

Below is a statement from the Ministry of Foreign Affairs

The Ministry of Foreign Affairs and Regional Integration has noted with concern, there cent comments by Hon. Samuel OkudzetoAblakwa, MP for North Tongu and Ranking Member of the Parliamentary Committee on Foreign Affairs, on the use of Ghana’s Presidential jet by the President of Liberia.

In the latest of such utterances, Hon. OkudzetoAblakwa sought to suggest that transporting the President of Liberia, His Excellency George Weah, aboard Ghana’s Presidential jet to participate in the emergency ECOWAS summit during the recent political crisis in Guinea, constituted an impropriety. Nothing could be further from the truth.

It is common knowledge that as part of bilateral and multilateral diplomatic relations, various friendly States provide assistance of different forms to each other. Thus, Ghanaian leaders shave in the past, been transported to different parts of the world on the Presidential aircraft of other States.

It must be emphasized that the practice of sharing travel resources among West African Heads of State and high ranking officials, is not are cent phenomenon. Indeed, in the past, some Heads of State have, in their capacity as Chair of ECOWAS, extended this courtesy.

In view of the many threats to peace and stability in the region, Ghana has found it beneficial to our national interests, to lend state equipment for the promotion of peace and security in neighbouring countries.

This proactive strategy undergirds the tenets of Ghana’s Foreign Policy, which include good neighbourliness, commitment to regional integration, mutual assistance, and the practical facilitation of African Unity.

Given the instability faced currently by some neighbouring states, Ghana’s prudent facilitation of the participation of West African leaders in the emergency Summit held in Accra, is a reasonable investment, which yields an

incalculable dividend of continued peace and stability in our own, nation.

In the wake of the recent political crisis in Guinea, the President of Ghana, H.E Nana Addo Dankwa Akufo-Addo, in his capacity as Chair of ECOWAS, not only convened an emergency Submit of ECOWAS Heads of State, but also facilitated the travel of some of his colleague

Heads of State to and from Accra. This included President Julius Maada Bio of Sierra Leone. President George Weah of Liberia and President UmaruSissocoEmbalo of Guinea Bissau. Important stakeholders in the Guinea geopolitical situation.

This gesture went a long way to ensure the participation of almost all Heads of State in the sub-region, though the notice for the emergency meeting was very short.

In an era when Ghana’s leadership and citizenry are championing a renewal of’ Pan-Africanism across the continent and the diaspora. (with free trade taking off under the AfCFTA), Hon. OkudzetoAblakwa’s insular posture comes as a surprise to the Ministry.

Indeed, our remit for regional integration remains a vital patriot Africa’s urgent quest for unity. Thus, we find any suggestion by the Hon OkudzetoAblakwa that the Government of Ghana’s foreign policy initiatives, which foster African unity are irrelevant rather strange.

The Ministry of Foreign Affairs and Regional Integration does not share this position and wishes to note that Ghana has since independence, hosted and displayed very warm hospitality and provided support to our brothers and sisters on the continent, and continues to host migrants from all over the sub-region. Our record speaks for itself.

For instance, President Nkrumah is known to have supported Guinea with 10 million pounds in her time of need and provided Ghanaian passports to Africans involved in the liberation struggle to enable them to overcome immigration restrictions imposed on them.

In the light of the strenuous and concerted efforts by ECOWAS leaders to broker peace in the region, the Ministry finds it rather unfortunate that Hon. Okudzeto Ablakwa would seek deliberately to muddy the waters with these negative comments.

Moreover, the expectation that Ghana as Chair would bill the Presidents of Liberia. Sierra Leone and Guinea Bissau while on a trip to participate in an emergency ECOWAS Summit, reveals an astonishing lack of understanding of the goodwill, camaraderie, and cooperation which exists amongst ECOWAS Heads of State.

The Ministry, therefore, wishes to assure the good people of Ghana that the Government of Ghana is not on a quest to dissipate wantonly State resources, but is focused on pursuing a pragmatic foreign policy that bolsters regional integration and good neighbourliness in a climate of peace and stability. This ultimately inures to the benefit of Ghana and West Africa at large.

Furthermore, the Government of Ghana is committed to the noble objectives of the African Union and will spare no effort in working towards a peaceful, prosperous, and truly United Africa.