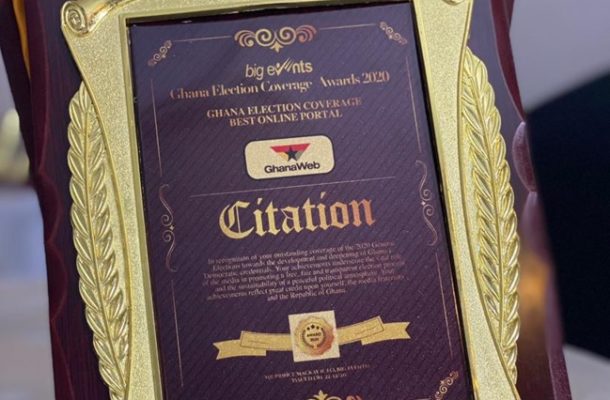 Accra, Ghana (December 23, 2020) - Ghana’s most popular news platform, GhanaWeb, has been adjudged the Best Online Portal at the Ghana Election Coverage Awards 2020 for its comprehensive online coverage of the December 7 presidential and parliamentary elections.

According to the CEO of Big Events Ghana, Prince Mackay, a 9-member awards committee made up of experts was formed to monitor activities of media organisations before, during and after the elections and they were highly impressed by GhanaWeb’s responsible journalism in the coverage of the elections.

“The criteria that were used are accuracy in reportage, efficiency in terms of time and speed, the relevance on information, responsible reportage, journalistic integrity, compelling election stories using data-driven techniques, breaking news, the human resource capacity, teamwork, panel of discussants and many others,” said Prince Mackay during the event held on December 22, 2020, at the Alisa Hotel in Accra.

“During the elections, we made sure we went through the various media houses and observed everything that was going on,” he added.

Editor-in-Chief of AfricaWeb, Ismail Akwei, received the plaque on behalf of GhanaWeb and expressed gratitude to the management, staff, correspondents, contributors and partners of GhanaWeb for their support during the election coverage.

“We’re excited to be here after 22 years,” said an elated Ismail Akwei who went on to recall an unfortunate treatment meted out to some journalists of GhanaWeb during the election coverage. “Two of our journalists were mobbed and beaten at the National Democratic Congress (NDC) headquarters and so far, we’ve not heard anything from any party directly or indirectly responsible for it. Work still moves on; GhanaWeb is trying to build bridges. We invite all of you to join our Africa dream.”

Prior to the elections, GhanaWeb launched the GhanaWeb Election Desk programme to bring readers and viewers an insight into all sides of Ghana’s election journey. The captivating and informative programme showcased interviews and projections from some of the nation’s political actors, opinion leaders, personalities among others and projected the expectations and will of the electorate.

The Ghana Election Poll which was powered by GhanaWeb and the Africa Consumer Panel was also launched in June to gauge opinions and perceptions of Ghanaians on the most pressing political and economic issues, as well as current events leading to the 2020 Presidential and Parliamentary Elections.

The online poll was conducted every month and the results were published at the beginning of every other month on GhanaWeb.com. It was devoid of spam as the respondents could take the survey only once. The MSI-ACI platform that hosted the survey recorded the device on which the respondent took the poll and did not allow for a second attempt from the same device.

On the election day, GhanaWeb made history with the launch of its live online television bringing millions of Ghanaians all sides and perspectives of the elections from across the 16 regions of Ghana. The coverage showcased live interviews with correspondents, journalists, resource persons, voters, election officials and ordinary Ghanaians whose views have been integral to the success of GhanaWeb.

GhanaWeb is Ghana’s first vertical portal, content curation and syndication website relaunched in 1999 to offer news, background information, classifieds, radio stations and a social network for Ghanaians and the Diaspora.

The privately-owned independent and objective portal operates under the laws of the Netherlands, a legal setup that has allowed Ghanaians to express themselves freely for over two decades through opinion articles and comments.

Made for and by Ghanaians, GhanaWeb is updated by a team of editors and journalists who ensure balance coverage of the news by creating original content, publishing syndicated and user-generated content and curating articles from a wide range of Ghanaian print and online media partners.

GhanaWeb has evolved over the years to include video content and social media components to its news feed as well as a mobile app for smooth web navigation. Its team of web developers and web designers regularly improve the technology and design of the portal which has been built to meet the requirements of its 4 million unique visitors each month.

According to the Alexa website traffic statistics, GhanaWeb is very popular among Ghanaian migrants in the United States, United Kingdom, Germany, Canada, Italy, South Africa, Netherlands, France and many other countries.

These loyal visitors and the millions of readers in Ghana have made GhanaWeb the most popular news website in Ghana and ranked the third most visited website in the country after Google and YouTube.

GhanaWeb is part of the AfricaWeb Holding group, an advertising and digital solutions provider for African publishers. AfricaWeb also owns CamerounWeb.com, TanzaniaWeb.com, MyNigeria.com among other country-specific portals as part of its goal of developing viable independent news portals as well as advertising and publishing solutions for Africa.

Below the Citation presented to GhanaWeb: 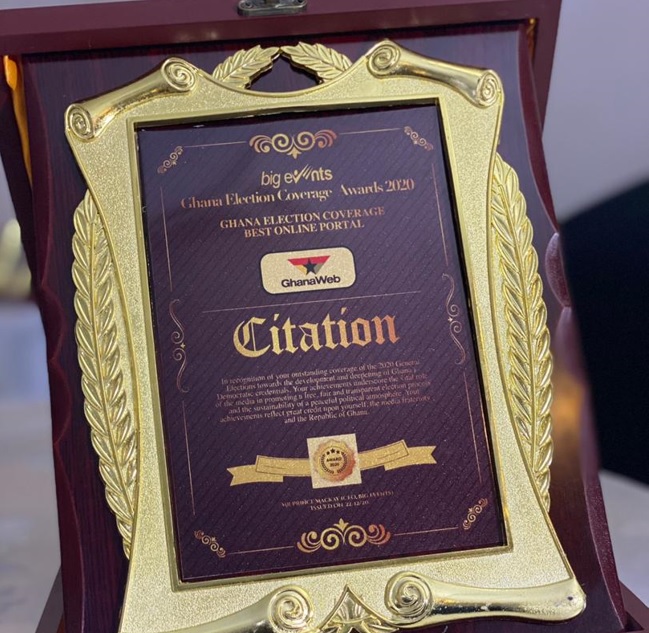