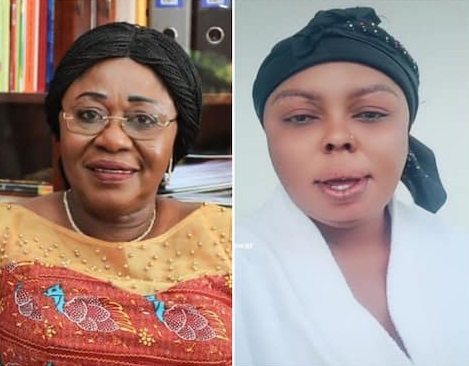 CoS, Fream Opare and Afia Schwarzenegger

It will be recalled that in a video on social media to extend appreciation to notable personalities who financially supported her in giving her late father a befitting burial, Afia Schwarzenegger claimed the Chief of Staff gifted her a whopping GHC50,000 to help in airlifting her father's casket to the country.

The claims did not sit well with NPP footsoldiers as they released a statement criticising the Chief of Staff over her move.

The Office of the Chief of Staff has since denied the claims made by the controversial comedian.

But, in her latest video to react to the development, Afia Schwar has unleashed a barrage of attacks on the Chief of Staff and the NPP.

According to her, the move to include Frema Opare in her list of donors was meant to expose her for refusing to attend her father's funeral or making a donation to financially support her.

Afia explained that she was present when Frema Opare lost her father and thus expected her to do same during her father's funeral. She revealed, however, that messages she sent to the latter were not even responded to.

“I attended Frema's father's funeral, made a donation and even removed my mask for her to see me but she did not attend my father's funeral. Even the message I sent her was not replied to. It was after the funeral that I decided to 'thank' those who failed to come. Frema Opare did not come and she did not give me a dime,” she revealed in her u-turn remarks.

In the said video, the obviously troubled Schwarzenegger could be seen holding a Schnapp and raining curses on herself to indicate to Ghanaians she never received any such amount from the Chief of Staff as she earlier claimed.

She also described the NPP as an “opportunist” party, claiming she openly supported and campaigned to bring the party to power but could not fathom why they will fail to largely support her in her time of bereaved.