Glo Mega Show finale lives up to its billing 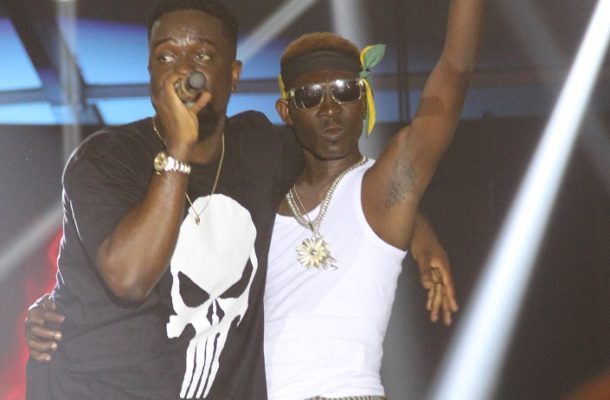 The intent of telecommunications company, Glo, to gets back onto the Ghanaian market through music and comedy has definitely worked.

Since August, Glo has been thrilling its subscribers and special guests with performances by some of the finest musicians and comedians across the continent with its Mega shows.

The Glo Mega shows were a combination of comedy (Laffta Fest) and music (Mega Music Show) events which had lived up to the hype.

The finale, which came off on Saturday, October 20 at the Fantasy Dome, Trade Fair, was to be a combination of music and comedy but with heavyweights like Sarkodie, Stonebwoy, Davido, Wizkid and Yemi Alade on the bill, it was definitely heavy on the music and lived up to its billing.

Sarkodie as usual had an amazing night but disappointed his fans when he failed to perform, 'My Advice', his diss track that many believe is aimed at Shatta Wale.

Sarkodie was at his best

When his name was mentioned as the next act to hit the stage, a section of the crowd started screaming ‘Advice…. Advice … Advice.’

Dressed in all black, Sarkodie started his performance with 'Can’t Let You Go', which many in the audience sang to.

Then he followed with others like 'Gboza', 'Baby', 'Azonto', 'Illuminati', 'Painkiller' among others but the highlight of his show was when a young guy with dyed hair, in jeans, a white top and chains around his neck came on stage acting like Shatta Wale.

At that point, everyone expected him to drop My Advice but he rather did 'Megye Wo Girl', a song he did with Shatta Wale.

Although they were disappointed the patrons still enjoyed the song.

His first time on the 'Glo Mega Music' stage did not go too well but on Saturday night, Dancehall artiste, Stonebwoy had a great show.

Stonebwoy had a good night

All the songs he dropped including 'Bawasaba', 'Top Skanka', 'Most Original', 'Dirty Enemies', 'Obiaa Wo Ne Master' and 'Go Higher' were enjoyed by the audience who were on their feet throughout his performance.

Flavour was also on point

As usual Yemi Alade and Flavour, who had performed at the Glo Mega Music shows before did not disappoint. They were exceptional with the live band and Yemi Alade’s energy was as usual boundless.

Patapaa, whose stagecraft has won him applause was on point again and his hit song, 'One Corner', did the magic for him as he got patrons’ attention.

Patrons had a good time

Davido turned up the atmosphere in the auditorium when he mounted the stage dropping songs like 'Dami Duro', 'If', 'Fall', 'Assurance', 'Gobe' and 'Skelewu'.

His songs are popular and he didn’t have to do anything but relax for the audience to do the singing for him.

The final act was Wizkid, who wasted no time getting into his show. He performed all the popular songs his fans wanted to hear such as 'Ojuelegba', 'Come Closer', 'Show You The Money', 'Caro', 'Halla At Your Boy' among others.

Wizkid was great too

Comedian, Foster Romanus was on hand to deliver some laughs to the patrons at the Glo Mega Show which was hosted by actress Juliet Ibrahim and comedian, Gordons.

Some of the special guests who were at the 'Glo Mega Show' were actors, Richard Mofe Damijo (RMD), Ebube Nwagbo and musician, Omawumi from Nigeria and Van Vicker, Martha Ankomah as well as Fiifi Coleman from Ghana.