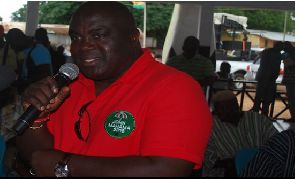 The Chief Of Staff, Julius Debrah has tasked supporters and sympathizers of the governing National Democratic Congress (NDC) in the Asutifi North Constituency in the Brong Ahafo Region to embark on door-to-door campaign to ensure the party retains power after the December 7 polls.

He reminded the people that it was only the NDC government that had development as a top priority ahead of the general election.

Mr. Debrah has therefore called on the people to vote massively for President John Mahama and Eric Addae as their Member of Parliament in the upcoming elections.

The Chief of Staff made the appeal at the official campaign launch of the NDC in the Asutifi North Constituency as part of his week-long campaign tour.

He commended supporters for showing love and support for the party and called for peace and unity within the rank and file of the party.

The Minister of Local Government and Rural Development (LGRD), Alhaji Collins Dauda, said Ghanaians desire to be given the best in the polls.

According to him, Ghanaians would have to choose between President and Nana Akufo-Addo of the New Patriotic Party (NPP), adding that the president should be the obvious choice.

He said even though the two candidates have been parliamentarians for 12 years, the President was more competent and a good leader because of his experience as a Vice President and President.

“Because of the qualities of President John Dramani Mahama, everywhere I have been in the country, most Ghanaians have endorsed his candidature than Akufo-Addo and have therefore said the presidential is a done deal and Akufo-Addo himself knows that he cannot match the president.

“So if John Dramani Mahama is going to be the president, then people of Kenyasi, people of Asutifi North must vote for Eric Addae (NDC parliamentary candidate),” he opined.

Alhaji Dauda regretted the continuous holding of the Asutifi North seat by the NPP since 1996 and urged NDC supporters to do more to win back the seat in December.

On his part, the NDC parliamentary candidate and District Chief Executive (DCE) for the area, Eric Addae said the Mahama administration with its social democratic orientation, had been working towards bringing development to the people.

According to him, he has all the qualities of a leader, adding that he is affable, highly respectful and has upright and untainted character to lead the people to progress.