“God himself will choose someone to lead us"- Mahama Kumasi NDC 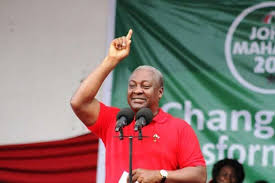 Former President John Dramani Mahama speaking at the National Democratic Congress (NDC) unity walk in Kumasi earlier today has stated that, God will select a leader for the party ahead of the 2020 general elections.

Mr Mahama after suffering a heavy defeat at the 2016 general election to the then Presidential candidate and the current President Akufo Addo is yet to declare his intention whether he will contest for the flagbearership of the party.

He said,“God himself will choose someone to lead us. And I know that when that person is selected, by the grace of God, we will be victorious in the 2020 election.”

Among the dignitaries of the NDC who graced the unity walk are the former Vice Chancellor of the University of Professional Studies, Accra (UPSA) Professor Joshua Alabi, as well as the former boss of the National Health Insurance Authority (NHIA), Sylvester Meensah, who are both hopeful of contesting for the party flagbearership.