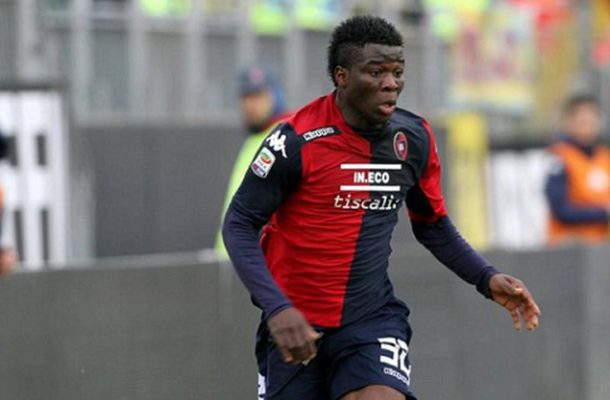 Godfred Donsah plays for Cercle Brugge on loan from Bologna

Ghanaaina midfielder Isaac Donsah has heaped praises on  coach Siniša Mihajlović of  Bolagna, decribing his former manager at the Seria A side as his "father"

Donsah left Bologna to join Belgiun side Cercle Bruges on loan but still recounts his relationship Serbian, who was always willing to keep him at the camp of the Rossoblù.

In an juvenews.com Donsah  recounted his relationship with  Mihajlovic – his coach in Rossoblù – and Nainggolan,a former team-mate at Cagliari.

"I asked for the transfer to Bologna after talking to Mihajlovic," he said.

"The mister is one who says things in his face: three years ago he would have wanted me in Turin too, he is like a father to me.

"This summer I spoke to him and he told me that he would keep me in Bologna willingly but that, coming back from an injury, I needed to play with continuity, to regain the rhythm and that in Rossoblù could not guarantee all this.

"I had also had an offer from a Serie A team from Belgium but I decided to accept the proposal of Cercle Bruges where I knew I could find minutes."

On Nainggolan he said–"I remember when I arrived in Cagliari I was very impressed Nainggolan that I then faced when he had moved to Roma. I reiterate his great aggression, the way he played I have always liked and I am grateful to Cagliari for his debut in Serie A"

The Ghanaian youngster also  analysed the Scudetto fight involving Serie A, praising Lazio and Inter for keeping up the challenge on Juve

"Juventus has been the big favourite in recent seasons but this year it is difficult to make a prediction because every game is really complicated," he said.

"No match is already decided because so many teams are having a great season, such as Bologna that I always follow and is doing very well. All three teams ahead this year have a chance to win the Scudetto.

"Every team is improving and the fact that Juventus failed to dominate did not surprise me. The suitors are growing: more than a drop in Juventus, it seems to me that Inter and Lazio have grown exponentially and therefore it has become more complicated for the Bianconeri to be able to confirm"