Godwin Ako Gunn writes: Leave the NDC out of your careless ban on Aboboyaa. Man must survive 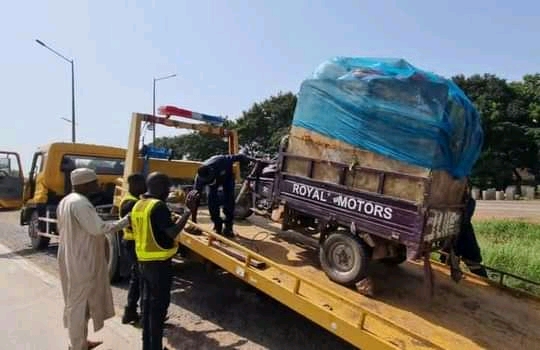 During the last elections, I followed how the NPP administration attacked the manifesto promise of the regularisation of the activities of the Okada riders. I thought they promised them a better life instead of riding?

The Dampare led police are also now enjoying their wives meals with serious exploitation from these riders, with these young men weeping each day to offices of people they perceive can be of help to them, retrieve their investment (bikes and tricycles).

When bing men are "belly full", they cares less about how people survive in this country. I weep for the attacks on the easy prey, the poor citizens .

How can tricycles be banned from using the same roads they contributed to construct. What alternative routs have been constructed for them? This can only come from an NPP administration.

I thought I heard the finance minister say the public sector is full, even graduates don't have a chance and must be entrepreneurs by hook or crook!!! Who decides which entrepreneurial venture one embarks on?

When the rich are looking for their comfort and convenience, they care less about the down trodden.

People with certificates and height, are running around the kumasi sports stadium and the Elwak stadium hopelessly looking for none existent opportunity to serve in the security services, with the unfortunate stampeding of the weak. All fingers are not equal and man must survive.

Decent ladies are accepting the pain and shame of sleeping with stinking old men for jobs. If we can not bow our heads in shame, let's not add to their woes.

Young men are losing the love of their lives, sometimes their first love because of their state of joblessness and hopelessness !!!

No man thinks of painting his house, when he has not eaten. Survival is the first instinct of man. So if people are striving hard to make a living by making the rubber hit the road, rather than fraud or crime, let's be careful the impediments we place their way.

If the riders need education or training before licensing, let's help them, than ban them.
If we need to expand our roads and create space, lets do it. If our roads needs lightening, let's fix them because we pay for street lights anyway.

If indeed the devil finds work for the idle hands, let those who think they are comfortable not create too many idle hands, it can be a threat to all.

I can't imagine a government that has abandoned a jute factory it inherited from its predecessor in Adeiso, abandoned the komenda sugar factory and other factories started by the previous administration, stopping young men from making a living differently !!! What a shame !!!

The youth are not lazy, neither are they interested in coming to the urban areas to sleep in kiosks or in front of shops with mosquitoes feeding on them. Most of them have better sleeping places back home.

If they had the jobs you promised them in their villages, they wouldn't be under this draconian and inhuman attacks on them.

No one came to Accra to take a view at the ocean. Hardships brought them here !!!

Hon minister, the NDC can not be a part of this. Carry your cross. We are thinking of better days ahead where youth unemployment will be at its barest minimum.

Don't rub your heartless NPP salt in our wounds. For now, the youth must survive and we will survive !!!