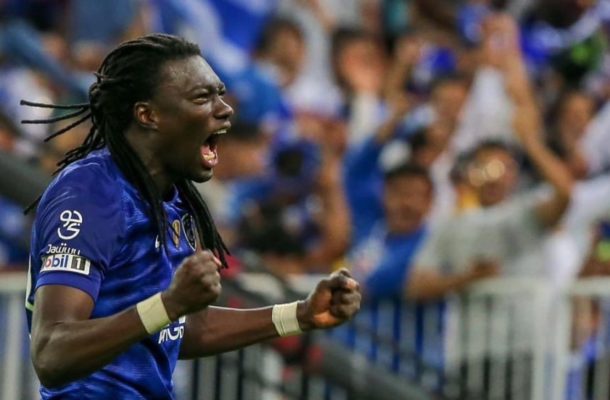 Al Ain: Al Hilal striker Bafetimbi Gomis is relishing the opportunity to show how good he and his team are ahead of their 2019 AFC Champions League opener against Al Ain on Tuesday.


Saudi Arabia’s Al Hilal reached the final in 2014 and 2017, losing to Western Sydney Wanderers and Urawa Red Diamonds respectively, as the AFC Champions League title continues to elude the Saudi giants despite their participation in each edition since 2009.

This year, the Riyadh-based side kick off their campaign against Al Ain, the same opponents they started against last year, although this time their group stage opener takes place at Al Ain’s Hazza bin Zayed Stadium.

“Al Ain are a big team,” said Gomis. “They have great experience in the AFC Champions League, but it is important for us to get our first points in the bag as soon as possible.”

The trip to the UAE marks Gomis’ debut in the competition. The former French international joined Al Hilal from Turkish side Galatasary in the summer of 2018 and got off to a good start domestically, scoring 17 goals in his first 22 games in the blue shirt.

“My ambition is to do well both as a team and individually. [Al Ain match] will be my Continental debut, so I have to take things one match at a time.”

Al Hilal sit top of the Saudi Pro League table, six points clear off their nearest chasers Al Nassr with just eight matches to play, and Gomis wants his side to show the same lethal edge on the Continental stage.

“I am motivated and the whole team is motivated to carry on our strong form from the league into the AFC Champions League.

“We have been doing well, Saudi and foreign players all working well together. We have a good chance to go far in this competition, and we will do our best to realise it."

Having spent his entire career in Europe, scoring nine UEFA Champions League goals in the colours of Olympique Lyon, Gomis was impressed by Asia’s top club competition at first sight.

“When I first watched the AFC Champions League, I found big names playing for the various teams from different countries, which shows that this is a huge competition.

“There are no small or weak teams in this competition. All teams deserve to be here. It’s an opportunity for teams and big players to showcase how they have prepared and how good they are. I love competing, and to win the biggest club competition in the Continent would be fantastic."