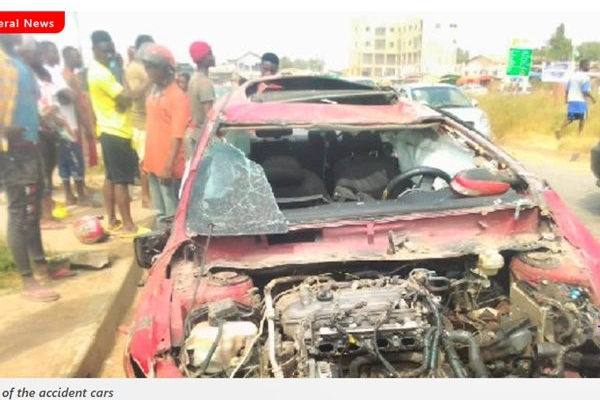 Five people have perished in a gory accident at Ablekuma.
Classfmonline reports that the crash occurred at Pentecost Junction, on the Awoshie-Pokuase Highway in the Greater Accra Region on Christmas eve.

Several others also sustained various degrees of injury in the crash, with some in critical condition.

Speaking to newsmen at the scene, some of the eyewitnesses said one of the drivers in a red unregistered car was speeding when he collided with two Okada riders.

The eyewitnesses said the red car dragged the two motor riders along and hit another car with registration number GE 2860-12, which was heading in the opposite direction.

Passengers in the car with registration number GE 2860-12 were believed to have gone for Christmas shopping and were returning when the accident occurred.

According to the eyewitnesses, the two Okada riders died.

In all, three people died on the spot while two others succumbed while on their way to the hospital.