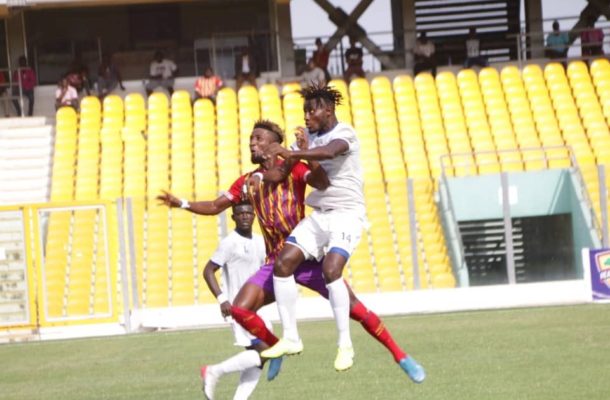 The Ghana Premier League, GPL returned for the opening weekend of the 2019/2020 season after Eighteen months hiatus.

Things would only worsen for Grant’s side at the Accra Sports Stadium as 19-year-old Attuauaye’s superb firt-half strike sealed a memorable win for Bibires as the raucous home supporters called for Grant to leave Hearts of Oak.

Kumasi Asante Kotoko defeated XI Wonders  1-0 at the Baba Yara Stadium in Kumasi.
Justice Blay’s first half goal, ensured the Porcupine Warriors recorded their first win of the season at home against Sure Wonders.

Newcomers, King Faisal were thrashed by Dreams FC 4-1 at the Theatre of Dreams in Dewu. Emmanuel Ocra
scored a brace, Ibrahim Issah, Dantani Amadu had a goal each before Latif Mohammed gave the debutants a consolation goal.

Aduana Stars secured all three points on the opening day of the 2019/2020 GPL season. Good old Yahaya Mohammed scored a hatrick before Justice Anane added one for Ogya Boys to make it 4-0 against Inter Allies at the Nana Agyemang Badu park in Dormaa.

AshantiGold breezed to a 3-0 victory over Accra Great Olympics at the Len Clay Stadium, Yusif Mubarak opened the scoring, before Amos Addai netted the second goal and Shafui Mumuni, who is the captain made it three for the Miners. Oly Dade, the Wonder Club promised to win first five GPL games but have tasted bitter defeat in the opener.

WAFA grabbed a 1-0 away victory against Karela United at the AKOON community park.

Liberty Professionals were held to a 2-2 draw by Wa All Stars now Legon Cities FC at the Dansoman park.

Medeama sealed all three points away after beating Ebusua Dwarfs at the Cape Coast stadium.

Bechem United hunted the Sharks of Elimina to gain all three points at the Nana Gyeabour Park by upstaging 2-0 in their opening GPL match.