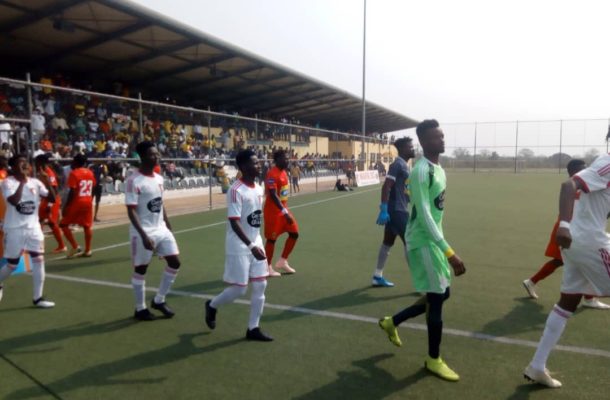 Ebusua Dwarfs picked their second win in eight games in the 2019/20 Ghana Premier League with a comfortable 3-1 home victory against Aduana Stars at the Cape Coast stadium on Wednesday.

Michael Asamoah got the opening goal for the Abontoabontoa boys, while Seidu Abubakar had the second before Yahaya Mohammed scored the consolation, Isaac Donkor made the points safe by adding the third to make it 3-1.

The result meant Dwarfs move from the bottom log, while the Ogya boys dropped from the summit.

At the Golden City Park in Berekum, hosts Chelsea recorded another victory to return top of the GPL table after a 1-0 home win against Karela United. Zacharia Fusieni scored the only goal.

Legon Cities edged out visiting Elimina Sharks  1-0 at the Accra Sports Stadium, courtesy of Jabila Abdul Karim penalty strike in the second half.

Host Liberty also lost to Dreams FC  2-1 in Dawu, courtesy Elvis Kyei Baffour and Ibrahim Issah goals - Dantani Mario Amadu had the consolation for Liberty at the Theatre of Dreams.

In another match day 8 fixture, Great Olympics  boosted their survival hopes after defeating King Faiaal in a seven goal thriller at Baba Yara Stadium in Kumasi.

Emmanuel Clottey scored twice in the first half before Osman Ibrahim equalised both goals, Razak Yussif added the third for the Dade boy as Baba Yahaya cancelled the goal before Glason Awaku finished the game with the fourth to make it 3-4.

WAFA were held 0-0 at home by Asante Kotoko at the Red Bull Arena in Sogakope.

Eleven Wonders lost 0-3 to Inter Allies at the Ohene Ameyaw Park in Techiman, with Victorien Adebayor and Mohammed Zakari getting the goals for the visitors.

Hearts of Oak  will host AshantiGold on Thursday at the Accra Sports Stadium in the last game of match week eight.

Footballghana.com reports that a total of twenty goals were scored in eight games played on Match Day 8, with four home wins and three losses and a draw recorded.