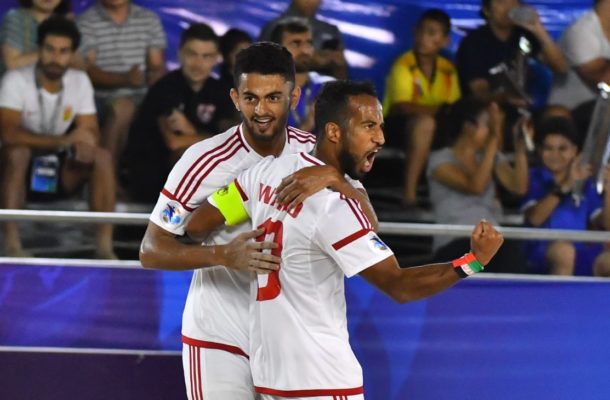 Pattaya: United Arab Emirates booked their place in the AFC Beach Soccer Championship Thailand 2019 quarter-finals with a game to spare, recovering from a slow start to defeat China PR 6-2 on Saturday.


Abbas Ali scored twice for Mohamed Almaazmi's side, who will now face Lebanon to determine the Group B winners on Monday.

UAE came into the contest as solid favourites, but it was China who exploded out of the blocks, showing their intent from the moment Han Xuegeng hit the upright from the kick-off.

Their efforts were rewarded when Guo Xuchenjiao found space to calmly put the ball into the back of the Emirati net and give Amarelle's side a surprise third-minute lead; one which could have been extended had Bai Fan's effort found the net instead of clipping the post a minute later.

The UAE had been slow to get going, but they began to assert their authority by forcing Han Yingnan into several saves, before taking control of the game with two goals in less than a minute.

First Ali Karim got the final touch after Hesham Al Muntser lobbed the ball over Han, then Abbas Ali caressed a free-kick into the top corner to make it 2-1 to the UAE in the ninth minute.

The second stanza was physical and, at times, chaotic, with Ali hitting the post and Han denying Ahmed Beshr in some of the standout moments, but an error from Liu Haoran cost China dear in the final minute of the period, as Ali robbed him of possession before finding the back of the net to give the UAE the biggest lead of the match so far.

The writing was on the wall for China when Walid Mohammad headed in Ali Mohammad's precise 26th-minute corner kick, and Kamal further underlined his side's superiority when he flicked home a long throw to make it 5-1 with six minutes remaining.

A late injury to Han further dampened China's mood, before Beshr flicked in UAE's sixth goal in the 32nd minute, and although Liu Yisi did pull back a late consolation, it was clearly the UAE's night.
Mohammed Almaazmi, UAE head coach

"I'd like to thank my players for this match, I think about China and they are coming for this match with nothing to lose, so this match was really tough today. I'm just thinking about the win, and I'm happy with it."

"I think today we did a better performance than the first game. They are a World Cup team. We knew about their quality, their capacity and their level, but we wanted to show that we have improved. We wanted to press and bring a good rhythm, and not let them do their best skills. They have not just a good Asian level, but in the world. This team is amazing and it's great pleasure for us to play against them."