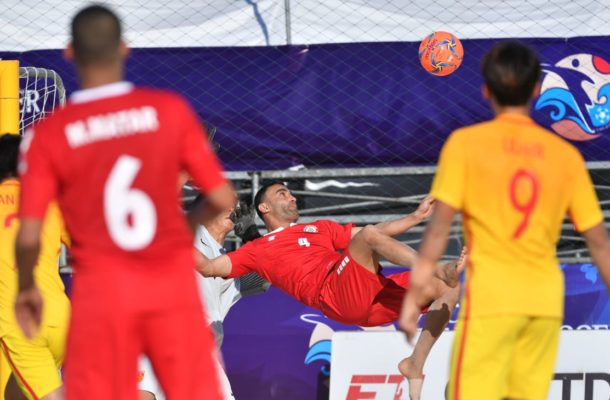 Pattaya: Lebanon withstood an early challenge from China PR to register a 5-3 win in the opening match of the AFC Beach Soccer Championship on Thursday.

The West Asians entered the Group B match as favourites, but it was China PR who scored the tournament's first goal, with Han Xuegeng arriving to side-foot home from close range in the fourth minute.

Alex Braga's side looked to bounce back, and were momentarily kept at bay by the goalkeeping of Han Yingnan, but they finally got going when Abdullah rounded the keeper to squeeze the ball home from a tight angle in the opening moments of the second period.

Liu Hoaran struck to put China PR back in front mere seconds later, before Fattal restored parity with a powerful close range effort in the 16th minutes to set a grandstand finish with the sides locked at 2-2 with one period remaining.

Lebanon's influence on proceedings steadily grew, and they took the lead for the first time in the 28th' minute when Mohamad Mechleb Matar's deflected effort crept past Guo Wei and into the Chinese net, before Abullah strengthended their position when he caught the defence napping to make it 4-2 two minutes later.

A fifth from Fattal gave Amarelle's side a mountain to climb, and - despite a late goal from Cai Weiming - an improbable Chinese comeback didn't eventuate, with Lebanon moving to the top of the group standings.

Their next match pits them against newcomers Kyrgyz Republic, while China PR - no doubt buoyed by their strong start - will face 2017 runners-up United Arab Emirates.

"The game was very tough. I said yesterday there are no easy game here, and it was shown inside the pitch. China has a good team and a very big coach, and I'm sure they'll become a big team in years to come."

"It was an equal game. They have more experience than us, more control of the ball and more control of the match. For two periods we were in that match. We are growing as a team. The players need hours of sand and training on the beach (to improve). I think we did a good job, but we need time."Source: the-afc.com