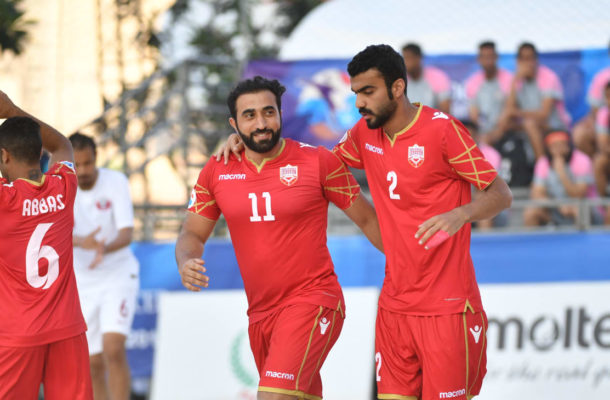 Pattaya: Bahrain successfully began their AFC Beach Soccer Championship Thailand 2019 campaign, pulling away late to account for Qatar with a 5-2 win in their opening Group C clash on Friday.


While they got the three points they came for, Bahrain had to earn their victory against an unfancied Qatar side, who refused to wilt after conceding twice in the first seven minutes.

Salman Al Yaqoobi and Abdulla Al Abdulla both scored twice for Bahrain, who are looking to qualify for the FIFA Beach Soccer World Cup for the first time since 2009.

Head coach Mahmood Al Ghawi warned pre-match that it may take his Bahrain side time to adapt to the Continental stage, but they immediately dictated terms, peppering Qatari shot-stopper Amro Fawzi's goal in the opening minutes.

That pressure paid dividends when Al Abdullah caressed the ball low to the keeper's left to open the scoring in the fifth minute, before Al Yaqoobi got on the end of Ebrahim Al Mahjoob's clever headed cross to give Bahrain a 2-0 lead at the end of the first period.

The Qataris gained a foothold in the game when Shran Al Klif scored in the first minute of the second period, but Bahrain's general ascendancy continued from then on.

The Bahrainis created a string of chances, but a combination of inaccuracy, the woodwork and, most crucially, several fine saves from Abdulrahman Qahtan kept the score much closer than the balance of play might have suggested.

After a long scoreless period, Bahrain finally found some breathing space when Ayoob Mubarak forced home their third with the outside of his left foot in the 28th minute, but Qatar reduced the arrears almost immediately through Hazem Samy.

Qatar could sense an opportunity for their first ever AFC Beach Soccer Championship points, but Salman Al Yaqoobi beat Qahtan to make it 4-2 with five minutes remaining, before Al Abdulla hammered in his second off the woodwork in the following minute.

"We won and that's the important thing. We had the first period but Qatar know what we do, so they made it about defence and were able to make goals themselves. This is just the first step for us."

"This is a very difficult match. I have some who joined us two weeks before (the tournament) and we lack experience, it's also beginning of the tournament, but we hope to improve next match and I think we have something more to show. We hope to continue and our players shouldn't be ashamed by the score today."