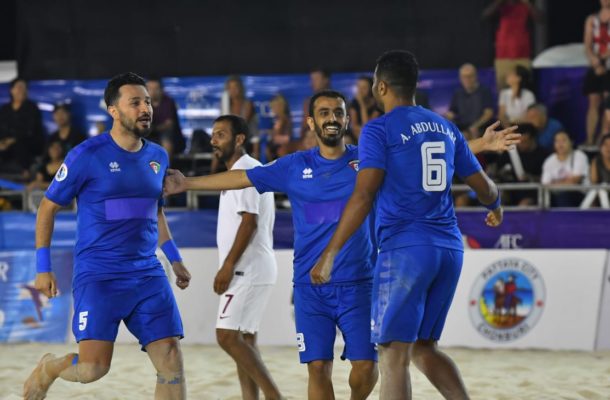 
Kuwait's parting victory drags them off the bottom of the group and into a final position of third, while Qatar finished winless for the second edition of the tournament in a row.

Abdulrahman Al Yaqoub was one of the stars of the show for Kuwait, scoring a hat-trick to power his side to a commanding final flourish in Pattaya.

The match represented the last chance at points for both sides, and it was Kuwait who took the initiative in the opening period, enjoying the lion's share of possession and showing a greater attacking intent than their opponents.

That intent was rewarded in the seventh minute, when Kuwaiti captain Al Yaqoub found space in front of goal to give Ahmed Abdelrazek's side a deserved lead.

Al Yaqoub wasn't too far with an acrobatic volley two minutes later, and a similar left from Mahdi Al Qallaf forced Abdulrahman Qahtan into a low save in the dying seconds, but no further goals came in the opening 12-minute period.

Kuwait's position was further strengthened when Abdullatif Al Hamad scored with a bouncing effort in the 15th minute, and they were three up when Mohamed Hajeyah produced arguably the brightest moment of their campaign with a simply wonderful overhead kick from distance.

Rashid Al Boinin drew a rare save from Kuwait goalkeeper Mohammad Al Saher, who turned provider seconds later when his long throw was nodded in by Ali Abudllah for Kuwait's fourth, and four became five when Al Yaqoub drilled a lovely drive into the bottom corner.

Qatar found the back of the net for the first time when Fawaz Daoud succeeded with a low effort in the 26th minute, but their joy was short-lived as Al Hamad volleyed home on the turn to bring up Kuwait's half-dozen at the half-hour mark.

A late free-kick gave Al Yaqoub the chance for his hat-trick, and fairly rocketed it into the bottom the net, before Al Hamad scored in the 35th minute to put the exclamation mark on a memorable night for Kuwait.

"It was a good game and we performed to our tactics and plan, Maybe after we were knocked out, we had no stress and nothing on our shoulders. We played well and we hope in the next tournament we will be stronger. Our Kuwait team needs more young players, with good physical attributes. I have spoken with the manager of the Beach Soccer Committee in Kuwait, and we have put in a plan for the next two years, starting with a league, and we hope more young players come to beach soccer in the coming years."

"Maybe we lost all our power in the game against Japan. We lost the ball and lost concentration. It felt like a friendly game because the result didn't matter and maybe that hurt our team today. I hope to improve by holding more training, and more games. I hope to continue in this team in the future."