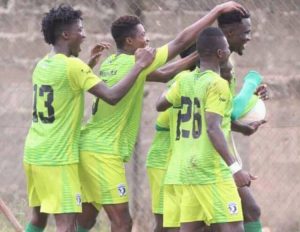 Bechem United walked away with all three points on Saturday as they defeat a resilient WAFA side by a goal to nil at the Nana Fosu Gyeabour Park in Bechem.

The opening 15 minutes of the game was very uninspiring as both teams took turns to size each other up but it soon exploded as they home side took the initiative asking all the questions.

WAFA who won last weekend by as slender goal against King Faisal struggled to cause problems for the home defense.

The hunters kept probing and their ingenuity was rewarded getting to the end of the first half as a cross from the left hand side was headed home by striker Hafiz Watah Konkoni to give Bechem United a one goal lead going into the break.

WAFA came out all guns blazing but could not get the equalizer as the home side stayed resolute and shut down any resistance from the Academy boys.

Bechem United now have four points after earning a draw in their opener against Liberty Professionals.