Hashim dares to dream ahead of make or break quarter-final 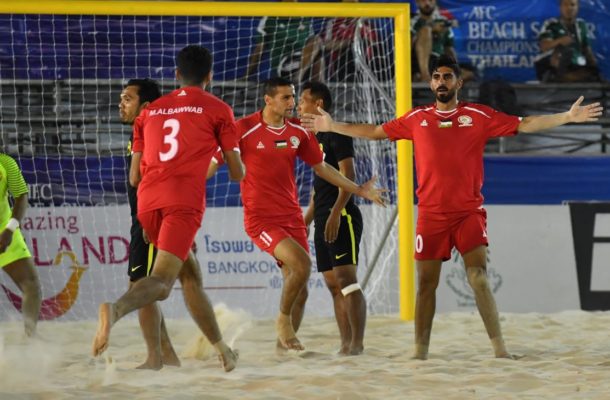 Pattaya: Palestine head coach Imadeldeen Hashim said an appearance on the world stage would provide the game with a boost in his country, ahead of his side's AFC Beach Soccer Championship quarter-final against Lebanon.


After missing the 2017 tournament altogether, Palestine's perfect record of three wins from as many matches in Thailand means they are now potentially two wins away from a history-making berth at the FIFA Beach Soccer World Cup.

Hashim is excited by that prospect, and believes his side has the ability to become the seventh Asian nation to appear in the global showpiece.

"I hope (World Cup qualification) happens for us in Palestine," he said.

"All people know about our problems in Palestine, but this is not a reason to stop our development. This Palestine team in this tournament is very good.

"We have belief from our results in this tournament and we hope everything can continue on this way in the future."

Palestine must finish as one of the top three teams in Thailand 2019 to reach the World Cup, staged this November in Paraguay, and that dream will only remain alive if they can beat Lebanon in Thursday's last-eight tie.

Semi-finalists at the AFC Beach Soccer Championship in 2017, Lebanon have the more recent runs on the board, but Hashim cited Palestine's 2012 Asian Beach Games win over the Cedars as evidence of his side's opportunity.

Matchday Three Highlights: Groups A & B

"Lebanon is a good team with good players. We payed against them in 2012, and that time, we won against Lebanon and we took a bronze medal. We would like this situation to happen again tomorrow."

While Hashim allowed his mind to venture into the past, Lebanon head coach Alex Braga is firmly focused on the future, declaring his side's knockout stage experience in 2017 would play no role in this year's edition of the tournament.

"We need to forget what happened in 2017 and other years, and go to the pitch and make new history."

Lebanon have been one of the most prolific sides in front of goal in the group stage, finding the back of the net 18 times, second only to Japan's 21, with Hussein Abdullah and Haitham Fattal scoring nine times between them.

His side have shown their flair, but Braga has insisted from day one that complacency in any match could lead to drastic consequences.

"This tournament, it's a big surprise for me, because the national team of Palestine is now a big team, and we respect them very much," he declared.

"There is no easy game in this tournament, that's what I said in the first press conference. So we need to show everything inside the pitch.

"We know our limits. We know everything about Palestine, and hope we can make a good game. We hope we can win, but it's not easy."

Both sides will need to overcome suspension woes in the match, with Lebanon missing goalkeeper Hussein Salame and Palestine to do without Mohammed Alsdudi.