Hearts beat Liberty3-2 in a friendly 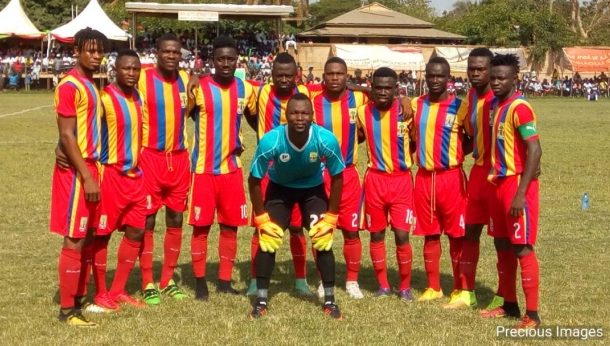 Hearts OF oak survived a stirring fightback from Liberty Professional to win 3-2 in a thrilling friendly at Pobiman on Wednesday.

Kim Grant's side established a 3-1 lead by half-time, as Manaf Umar scored a brace and  set up Obeng Junior for the Phobians third  but saw another cancellation by the visitors at the end of the 90 minutes.

The Phobians could have gone up as early as the 4th minutes but  Fatawu Mohammed's was denied as his strike hits the cross bar.

A minutes later, Manaf Umar pounced on a mistake by the Liberty goalkeeper to give the Phobians the lead.

Umar doubled the lead on 27 minutes when he slotted home from close range before assisting to make it Kwadwo Obeng Jnr made it three-nil for Hearts in the 33rd minute.

But Liberty pulled one back after 40 minutes through Elvis Kyei Baffour after a save by Goalkeeper Ayi bounced back to him to tap home.

He complted his substiiuton for the as Enock Addo, Anthony Quayson and Daniel Kordie came on for Fatawu Mohammed, Obeng Jnr and William Dankyi

The Phobians will move back to their favourite Accra Sports Stadium on Sunday to to play Dreams FC in  S.T Nettey Memorial Cup