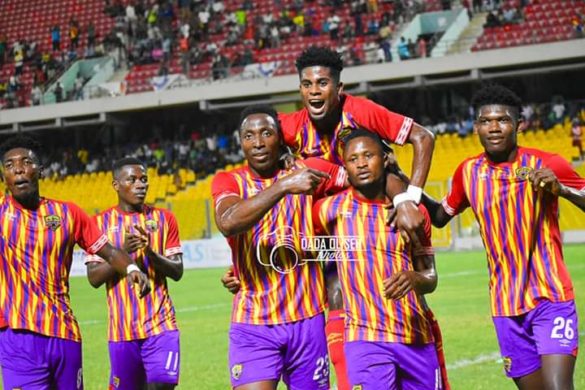 The Phobians annihilated the flaundering Wonder Club in an action-packed game on Wednesday evening, with the scoreline being the heaviest ever in matches between the two Accra clubs.

A brace from midfielder Benjamin Afutu and a goal each from Strikers Joseph Esso and Daniel Afryie defined the literature of the game, which was played amid some showers.

Both sides started brilliantly but it was the Phobians who made more incursions in search of the opener.

Hearts signaled the first shot on the 7th minute after Kofi Kordzi’s effort missed by inches.

Joseph Esso tapped in a rebound after Kofi Kordzi’s strike was punched out by goalkeeper Nelson Ayuba on the 16th minute to put Hearts ahead.

Olympics came in with an attempt in the 23rd minutes but Sulley Ibrahim's  strike was swiftly blocked by goalkeeper Richard Attah.

Maxwell Abbey failed to direct his header as it went into the hands of Hearts goalkeeper Richard Attah on the 35th minute.

The last ten minutes of the game saw seen alot of chances squandered by both sides, with the Phobians being the biggest culprit with their indecisiveness in front of goal.

Hearts went into the first half break with a goal advantage after an additional one minute.

Six minutes into the second half, the first chance fell to Ibrahim Sulley whose effort missed narrowly after both sides brought in extra energy.

Maxwell Abbey came close with a powerful strike over the post on the 57th minute as Raddy Ovouka also responded with the same strike a minute later for Hearts.

Olympics brought on David Amuzu for Gyamfi Isaac on the 62nd.

The however offered little sign of making a comeback, falling further behind when Benjamin Afutu Kotey doubled the lead for the Phobians a minute later when he out- jumped the Olympics defense  from a Joseph Esso cross.

The comprehensive win lifted the Blues above Tottenham into fourth, with just one point separating the top five.

The Phobians kept on piling on the pressure out of which Olympics Jamaldeen Haruna was shown a yellow card after a tackle on Michelle Sarpong.

They capitalised on Olympics defensive deficiencies to grab the third through Benjamin Afutu who tapped in from a rebound after Olympics keeper failed to stop a 15-yard strike  drilled in by Afriyie.

Kofi Kordzi made way for Umar Manaf as Hearts effected their first change.

Razak Yusif was replaced by Yaw Dasi for Olympics on the 72nd minute.

Hearts came close to make it four but Esso’s effort missed by inches after Sumaila Larry sent in a decent cross on the 76th minute.

Grippman Roland came on for Haruna Jamaldeen on the 80th minute for Olympics.

Hearts brought on Abubakar Traore for Joseph Esso with five minutes to go.

Daniel Afriyie skipped around a static defence to slot in and seal victory with a minute to go after goalkeeper Nelson Ayuba failed to clear the ball in his half.

Olympics were ragged at the back, ripped open by Nettey's pass that was first connected by Afutu, and Afryie grabbed his debut Hearts of goal out of the scrappy situation.