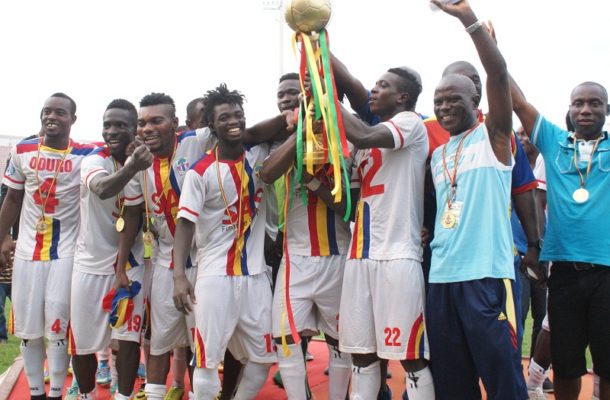 Accra Hearts of oak have refuted reports they have agreed  to honour  the 2019 presidential cup with "any party".

City rivals Accra Great Olympics on Tuesday announced they will play this year's  President's Cup in March against the year 2000 African Champions, which was widely published by the Ghanaian media.

"A statement signed by the Olympics PRO  said: ''The club would like to urge the fans to storm the Accra Sports Stadium in their blue and white colours on Wednesday 6th March, 2019 to cheer the boys on.''

But  an official statement from the Phobians on Wednesday denies having any knowledge of the existence of such agreement.

It belied what has earlier gone viral in the Ghanaian media.

"The management of @HeartsOfOakGH wishes to state that it has not agreed with any party to honour the 2019 President’s Cup Match against city rivals, @AccraGtOlympics as has been announced in the media, the phobians said in a tweet.

The Phobians  have  won the president cup on four occasions.

They last won it in 2015 when they beat perennial rivals Asante Kotoko  5-4 on penalties.