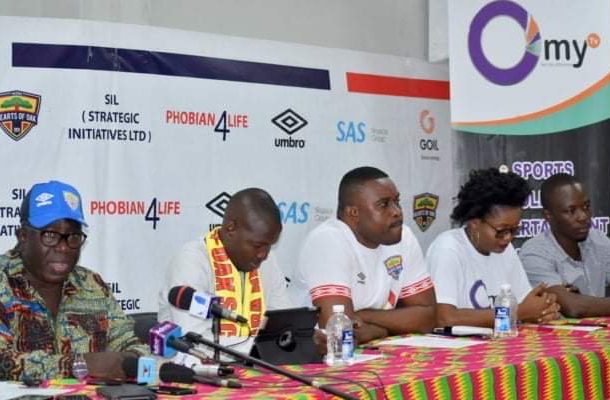 Accra Hearts of Oak MD Frederick Moore has backed a move to organise a grand 108th anniversary celebration of the club, expressing confidence in the Planning Committee for the event to put together a very good organization.
The National Chapters Committee (NCC), the official supporters body  of the club, in partnership with private television firm, OMY TV have lineup various activities towards the club's birthday celebration, which falls on 11th November.

At a press briefing in Accra on Friday, Moore said he expects the club's 108th-anniversary celebrations "to be a success" as it will be a "springboard" to carry the club to the higher heights.

The Board and Management of the club he added, are in full support of the upcoming programme and tasked all Phobians to embrace the project as the club head closer to the celebrations.

Dubbed the "Grand Hearts Gathering," the project will see  the two parties putting together a mega bash to celebrate one of the august occasions on the club's calendar.

A Committee has been put in place to plan for the occasion and the MD  said he has "full confidence in the personnel to put together a very colourful programme celebration" which would be held with a grand durbar on November 16 in Accra.

"I believe our fans would enjoy what would be put together by the organizers and I trust that it would be the springboard for us to move forward in the right direction hence", Mr Moore added.

The 108th-anniversary celebrations of the former African Champions would be officially launched on October 16 also in Accra to herald the celebrations to be held at the Trade Fair Centre, Pavilion A in Accra.

This is expected to bring together Phobians from far and near and would involve a musical concert with some of Ghana's top musicians set to feature, the organisers have said.

Awards would also be handed to some personalities that have served the club past and present including players.

Other activities planned for the occasion would include inter quiz and 'jama' competitions for Chapters.

Details about the Phobia4Life policy and the Pobiman project will also be announced as well as the essence of purchasing Umbro jersey.

Accra Hearts of Oak was formed on 11th November 1911 and remains the oldest existing football club in the country.