Hearts of Oak return to Accra Sports Stadium with Dreams 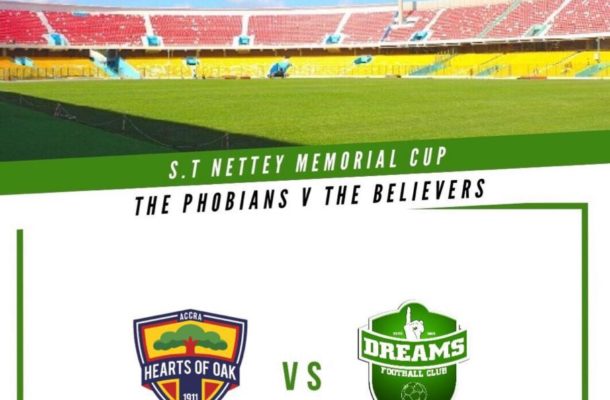 Accra Hearts of Oak and Dreams FC will clash on Sunday for the S.T Nettey Memorial Cup, a game expected to rekindle the euphoria that used to engulf the Accra Sports Stadium.

Sunday's game will mark the return of the Phobians to their favourite grounds after 18 months hiatus.

The game scheduled for Sunday February, 24 at the Accra Sports Stadium is to honour of the late S.T Nettey.

Mr. Samuel Tetteh Nettey used to be Spiritual Head and Patron of the club before he passed on in 2007.  The late ST as he was affectionately called, was the son of the Principal Founder of the Club, Asafoatse C.B. Nettey.

He also served as Commissioner of Labour and Social Welfare under the regime of the late General J.A Ankrah of the National Liberation Council (NLC).

Games between Hearts and Dreams FC has been fiercely contested and Sundays' promises to be one of such, following the unbeaten run of both sides in friendly.

The last four clashes between the two clubs have been too closed to call with both clubs having won one each whilst the remaining two have ended in draw.

The Phobians last played at the Accra Sports Stadium when the hosted Inter  Allies in the last match match of the 2016/17 league.