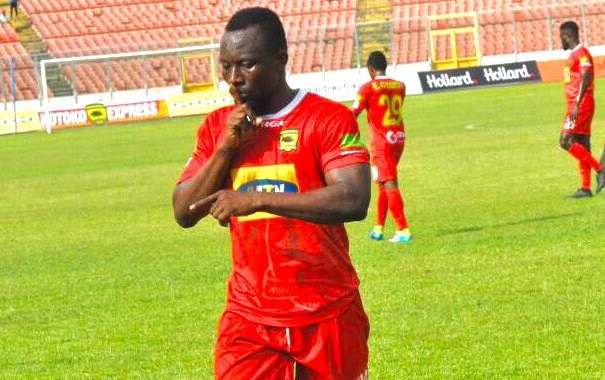 Hearts of Oak midfielder Samudeen Ibrahim may have landed himself in hot water for carelessly posting a comment on Facebook that mocks Sadick Adams after the player collapsed during the Ghana@60 match.

The Kotoko striker, who went down without any contact during the match, had to be immediately rushed to the Konfo Anokye emergency unit and has since been responding well to treatment.

Samudeen took to his Facebook page today to recklessly throw a jab at Adams while offering his sympathy.

He posted; “Soo sad to see a brother collapse on the field of play, speedy recovery Sadiq Adams I hope and pray u bounce back as quick as possible to continue from where u stoped, buh I guess now u knw the difference between inusah and atinga...lol”

The post seems to be making an insensitive joke about the ‘difference’ between defenders Inusah and Atinga at a time when a fellow footballer almost lost his life doing what he loves.

His mockery comes at the back of what happened in the FA Cup final when Sadick Adams scored a hat trick with Atinga as his marker.

Kotoko's Sadick Adams rushed to the hospital after Hearts draw

But Saddick, who grabbed  the hat-trick for the fabulous team during the FA cup final, on Sunday became a pale shadow of his former self when he was overshadowed by Inusah's impreganabilty

The former Bechem United striker could barely get  a breathing space as he was outfoxed by the Hearts of oak's skipper, a move that many pundits believed eluded the Phobians in the "unmissable" final in Tamale.