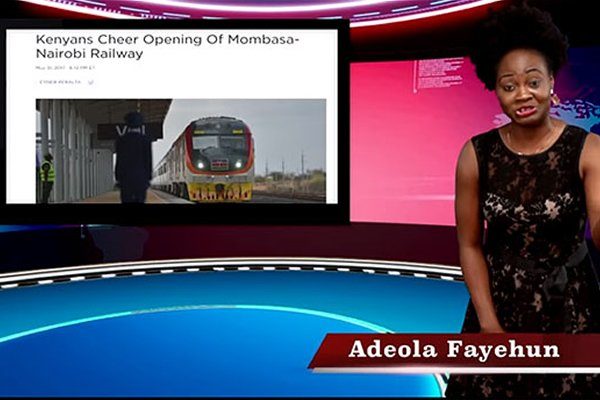 A Nigerian comedian has dissuaded Kenyans from complaining about the cost of the Standard Gauge Railway launched by President Uhuru Kenyatta last week.

Adeola Fayehun, a popular comedian who posts her skits on YouTube, told Kenyans that Nigeria spent four times more on a similar project and yet they have nothing to show for it.

In her latest episode of ‘Keeping It Real With Adeola’, she talks about how Kenya has some of the best train stations, "even better than our airports."

“Compared to our train, Kenya’s own are not that special, but their train stations look nicer than our international airport,” she said.

She wondered why Nigeria had to spend so much money, yet Kenya only spent Sh3.2 Billion and the results can be seen.

She went ahead to praise Kenya for having plans to link the railway line with neighbouring countries, Nigeria has no such plan.

In her comic skits, Adeola discusses current geopolitical, social and economic issues that affect Africans Living on the continent.

In 2014, a state-owned Chinese company signed a $12 billion agreement to build the railway along Nigeria's coast. China Railway Construction Corp Ltd [CRCC] will construct the railway that will stretch for 1,402 kilometres [871 miles] along the coast, linking Lagos and Calabar.

Nigeria trains will travel at a maximum speed of 120 kilometres per hour. The railway Line is expected to be completed in 2018.