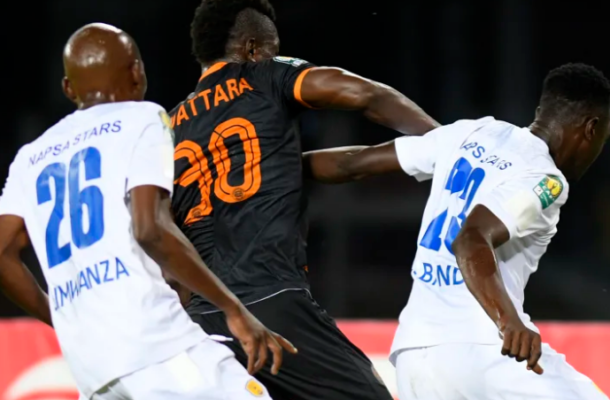 The number of qualifiers for the Total CAF Confederation Cup quarterfinals rose to six Wednesday after the shock matchday 5 elimination of title-holders Renaissance Berkane from Morocco.

Raja Casablanca of Morocco had already qualified and were joined by JS Kabylie of Algeria, Coton Sport of Cameroon, Jaraaf of Senegal, CS Sfaxien of Tunisia and Pyramids of Egypt.

Berkane fell 1-0 away to previously winless NAPSA Stars of Zambia in Lusaka, where Doisy Soko scored the 53rd-minute winner in Group B.

Coton Sport surprisingly lost 2-1 at home to JS Kabylie in the same section, conceding two goals in five minutes after being reduced to 10 men when Sibiri Sanou was red-carded.

Despite the loss, Coton qualified with Kabylie as both have nine points, four more than Berkane with just one mini league round remaining in the African equivalent of the UEFA Europa League.

Another shock casualty was twice Confederation Cup winners Etoile du Sahel, who were beaten 1-0 by Group C leaders Jaraaf of Senegal in Thies.

Youssou Paye netted on 25 minutes -- his third goal in as many matches -- as Jaraaf became the first Senegalese club to reach the knockout stages.

The match was moved from Ouagadougou to the Benin capital because the Salitas stadium does not meet international standards.

Sfaxien triumphed through goals early in each half from leading scorer Firas Chaouat and Nigerian Eduwo Kingsley.

Jaraaf have 10 points and Sfaxien nine and cannot be overtaken as twice Confederation Cup winners Etoile are four points adrift of their fellow Tunisian club.

An Abdallah el Said goal 12 minutes from time earned 2020 runners-up Pyramids a 1-0 win over Nkana of Zambia in Ndola and second place behind Raja in Group D.

Before the group began, Nkana had never lost at home in 64 CAF matches spanning 38 years. Now, they have fallen to Raja and Pyramids in Zambia within 36 days.

Raja sent an understrength side to face pointless Namungo of Tanzania in Dar es Salaam and they cruised to a 3-0 victory through goals from Ilias Haddad, Congolese Fabrice Ngoma and Zakaria Habti.

Group A remains in the balance with leaders Orlando Pirates of South Africa held 0-0 in Soweto by Entente Setif of Algeria and Al Ahly Benghazi of Libya hosting Enyimba of Nigeria Thursday.

If Enyimba win, they and fellow former African champions Pirates will book last-eight places, reducing the eight matches next Wednesday to contests for final placings.

But a Benghazi victory would keep all four clubs in contention with not even 2015 runners-up Pirates sure of a place in the April 30 draw.

Flight and visa complications delayed the departure of Enyimba from Nigeria, leading to the match being postponed 24 hours.