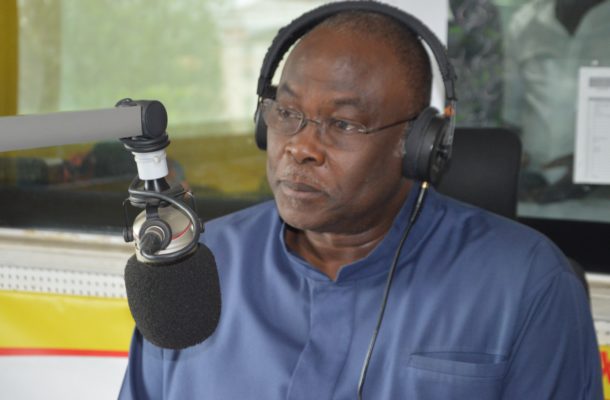 Presidential hopeful of the main opposition National Democratic Congress (NDC), Ekow Spio-Garbrah, has said he is “unimpressed” with the posture of President Nana Akufo-Addo as far as the Ghanaian leader’s stance on homosexuality is concerned.

According to Mr Spio-Garbrah, Mr Akufo-Addo has not been categorical in stating his position on the legalisation of homosexuality in Ghana, which, to him, gives people room and motivation to push pro-gay and legalisation agenda.

In an interview with Aljazeera last year, President Akufo-Addo said changing Ghana’s laws to legalise homosexuality is not a matter which is "on the agenda" but "bound to happen".

Asked by the interviewer about why Ghana’s laws still criminalise homosexuality, Nana Akufo-Addo said: “This is a socio-cultural issue, if you like,” adding: “I don’t believe that in Ghana, so far, a sufficiently strong coalition has emerged which is having that impact on public opinion that will say: ‘Change it [the law], let’s then have a new paradigm in Ghana’”. “I think that it is something that is bound to happen”, the president added.

Asked: “What’s going to provoke it, what’s going to make it happen?” President Akufo-Addo said: “Oh, like elsewhere in the world, the activities of individuals [and] groups”.

He recalled how countries such as England, which, in the past, abhorred homosexuality, have over the years succumbed to pressure from LGBTQI lobbyists to amend their laws to accommodate same-sex relationship.

“I grew up in England; I went to school as a young boy in England and I grew up at a time in England when homosexuality was banned there, it was illegal and I lived in the period when British politicians thought it was anathema to think about changing the law and suddenly the activities of individuals, of groups, a certain awareness, a certain development grew and grew and grew stronger and it forced a change in law. I believe those are the same processes that will bring about changes in our situation.”

The president, however, pointed out that: “At the moment, I don’t feel and I don’t see that in Ghana, there is that strong current of opinion that will say: ‘This is something that we need even deal with’. It’s not, so far, a matter which is on the agenda.”

Mr Akufo-Addo’s predecessors, presidents John Mills and John Mahama were confronted with similar issues on homosexuality while in office.

Prof Mills said in connection with the issue: “I, as president, will never initiate or support any attempt to legalise homosexuality in Ghana,” after UK Prime Minister David Cameron said in 2011 that aid would be cut to countries which failed to respect gay rights.

Also, Mr Mahama told the Scottish Parliament during a visit while in office that: “My country is a secular one made up of Christians, Muslims and traditional believers. None of these sects accept gayism and lesbianism. As a leader once the people I rule abhor these things, I cannot accept these cultures on the grounds of human rights. Despite our challenges, our nation stands paramount against any other foreign aim," adding that: “Most Africans frown at the thought of legalizing homosexuality as it defies every aspect of their socio-cultural and religious principles."

With this as the backdrop, Mr Spio-Garbrah, who was a guest on Class91.3FM’s Executive Breakfast Show on Tuesday, 15 May 2018, was asked by host, Moro Awudu, if he has been impressed with the views of President Nana Akufo-Addo.

“Of course not”, Mr Spio-Garbrah answered.

He pointed out that the President of Uganda, Yoweri Museveni, has been categorical about his opinion just as former President Mills. However, he noted, President Akufo-Addo’s posture on the matter portrays that: “If people mount pressure on the system, Ghana will become like other countries where homosexuality has been accepted; that is what I heard him say to an interviewer”.

For him, “Under this current president, the sense of the whole country is that we are drifting towards a pro-homosexuality agenda, and many of us, with all due respect, do not know what it is that homosexuals want in Ghana that they are not getting, because I’m not aware of any homosexual that has been denied free education or free SHS or has been denied access to normal healthcare services or has not been allowed to get a driver’s licence or has been denied a passport because of his sexual preference…”

MR Spio-Grabrah said: “We have a very tolerant society; we know people have very different sexual preferences. Nobody asks you about your sexual preference when you apply for a job, but if you want to rub it in people’s faces that I am a homosexual, so, treat me special or different, then we will say: ‘Hey my friend, what is this?’”.